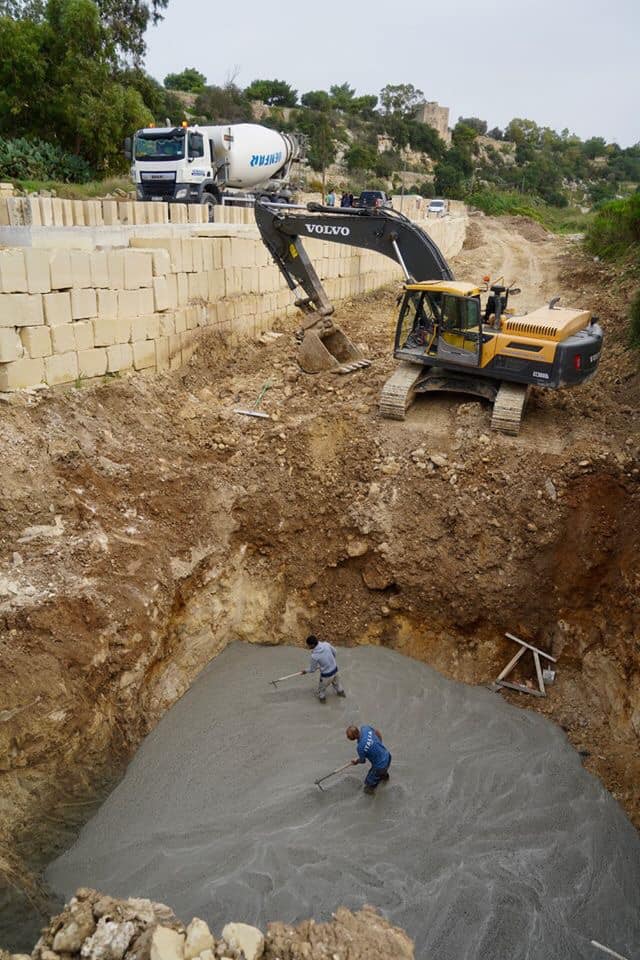 Infrastructure Malta has forged ahead with works in Wied Qirda, insisting that its job is to restore a public road that collapsed, despite a stop order by the environmental watchdog.

The Environment and Resource Authority (ERA) insisted that the works were not covered neither by a planning permit nor by an environmental permit.

Newsbook.com.mt asked on which basis did the authority continue with its works and to cite the law which enabled it to continue with the works despite being slapped with a stop order. This newsroom reached out to environmentalist and eNGO lawyer Claire Bonello on the matter.

Infrastructure Malta has ordered its contractor to continue with the works. Concrete was poured into a large hole dug in the ground.

In its reply to questions by this newsroom, Infrastructure Malta said that the ongoing works in the indicated stretch of rural road are required to repair part of the road structure which collapsed earlier this year during a storm. The agency went into great length to explain the nature of the works required, saying that the first phase consists of reinforcing road foundation structure which would reduce the risk of further damages in the future. A second phase includes the removal of the nearby crossing across the valley watercourse and the reinstatement of the area to facilitate water flows and the regeneration of the part of Wied Qirda.

Infrastructure Malta also mentioned the case of a truck loaded with asphalt which overturned on the side of the road. The asphalt was spilt in a nearby field. The agency noted that the asphalt has been cleaned up, adding that the damage done to the road structure will be repaired in the coming weeks.

The agency claimed that it did not require a development permit from the Planning Authority to remove the danger from the road and render it safe to the public.

However, Dr Claire Bonello pointed out that such claims are untrue. She explained that the agency should still have observed the requirements of the Development (Removal of Danger) Order. The subsidiary legislation makes it mandatory for the applicant to request the Planning Authority for an order of authorisation to remove danger – under strict conditions. These include identifying the precise location and extent of the site, the degree of danger, the full nature, the methodology and extent of the proposed works to remove the danger.

Unlike the claims made by Infrastructure Malta, works carried out under the Development (Removal of Danger) Order require that the works are carried out in strict compliance with the terms of this authorisation from the Planning Authority.

Another issue which arises surrounds the Stop and Compliance Order issued by the Environment and Resource Authority. Bonello commended ERA’s actions when it stepped in to safeguard a protected valley of great ecological and heritage value.

Referring to the Stop and Compliance Order, Infrastructure Malta said that it was instructed: “not to conduct any further workers from within the valley bed that is not directly related to the reinforcement of the road leading to the private residence before obtaining a Dangerous Structure clearance from the Planning Authority.”

The agency said that it informed the environmental watching that the ongoing works consist of repairs and reinforcement of the existing road damaged by heavy rainfall this year. The only other works taking place in this road are the repairs and cleaning in the area affected by the recent truck accident. Infrastructure Malta added that “there was no need to issue a Stop and Compliance Order”. Citing the Development Planning Act, the ongoing works to remove this danger from the road and render it safe to the public following accidental and storm damage do not necessitate a Development Permit from the Planning Authority.

Dr Bonello remarked that Infrastructure Malta did not bother to obtain a permit from ERA under Article 58 of the Environment Protection Act. “It has gone ahead and savaged the physical and ecological integrity of the valley – in flagrant breach of this law,” Bonello charged.

A spokesperson for the agency said that its architects and civil engineers informed ERA that the only works taking place in the indicated area are specifically linked to the repair of storm damage that rendered the road unsafe. “Works cannot be stopped as this would put road users’ safety at risk,” Infrastructure Malta stressed.

The agency warned that unless the works are completed in the shortest time possible, other parts of the road may collapse as well.