Infrastructure Malta has accused ‘some’ organizations of perpetuating a ‘lie’ that the agency’s proposed safety upgrade of Mrieħel Bypass involves the widening of the said road to six lanes.

In a statement on Saturday, the agency accused Rota of repeating this ‘baseless allegation’ saying that at no point during the ongoing planning stages of this project did it consider the widening of the Mriehel Bypass to six lanes.

On Friday, Rota said Infrastructure Malta is only using cycling infrastructure as a pretext to take up more land for road widening without considering the needs of the users for this infrastructure.

In a reaction, the NGO said additional land is also required for a new cycle lane and footpath along the same bypass, which does not currently have any facilities for alternative modes of travel.

An infographic was published by Rota to show that extra land is not needed to have a safer road. 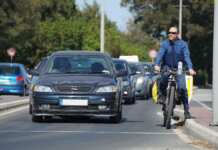 Infrastructure Malta reacted to Rota’s statement saying that the NGO recognized the need of upgrading the bypass’ infrastructure for pedestrians and alternative modes of transport. It added that this was one of the project’s two aims.

The agency confirmed that initially, its road planners had considered including a new segregated path for pedestrians and cyclists along the eastbound carriageway (Mriehel to Qormi) of the road.

However, upon further studies, this proposal was discarded since it would have necessitated the shifting of parts of the road’s existing central strip and the uprooting of many of its mature trees, Infrastructure Malta said.

“In addition, this proposal would still not have led to a reduction in the area of new land required for this new infrastructure. Thus, whilst land-take would have remained the same, more trees would have had to be removed. This is the main reason why Infrastructure Malta is proposing the new cycling and walking track along the other side of the road.”

Rota also included a design with its proposal relating to the reallocation of space.

The agency replied that as the diagram itself confirms, this proposal would entail the shifting of the existing central strip and the uprooting of its trees.

“Moreover, in this proposal, the non-governmental organisation is suggesting narrowing the road’s existing vehicle lanes to approximately 2.75 metres, which is not adequate for the road in question. The 3.25-metre lane width quoted in Rota’s diagram is incorrect as it omits an additional space of up to 0.5 metre on each side of the two carriageways, which is required in such road design between the lane edge line and the kerb.”

In December, Qormi residents along with farmers and Moviment Graffitti revealed that Infrastructure Malta was planning a flyover over agricultural land. Qormi local council passed a motion aimed at protecting the farmland threatened by the project.

Infrastructure Malta also referred to recent ‘false’ allegations by individuals and organisations that the proposed safety upgrade of the Mriehel Bypass requires 22,500 square metres of additional land. It added that the proposed new flyover and the roundabout beneath it, to eliminate the accident black spot at the T-junction with In-Negozju Street, will only require 5,657 square metres, 75% less than falsely alleged.

The planned safety upgrade, which is still in its initial design stages, involves the construction of a flyover at the junction between the Mriehel Bypass (Royal Malta Artillery Avenue) and In-Negozju Street, Infrastructure Malta said, adding that it would eliminate the existing accident black spot, where vehicles are forced to make a sharp turn against oncoming traffic to reach Mriehel through In-Negozju Street. This T-junction has been the site of several fatal collisions since the Bypass was built in the 1990s.