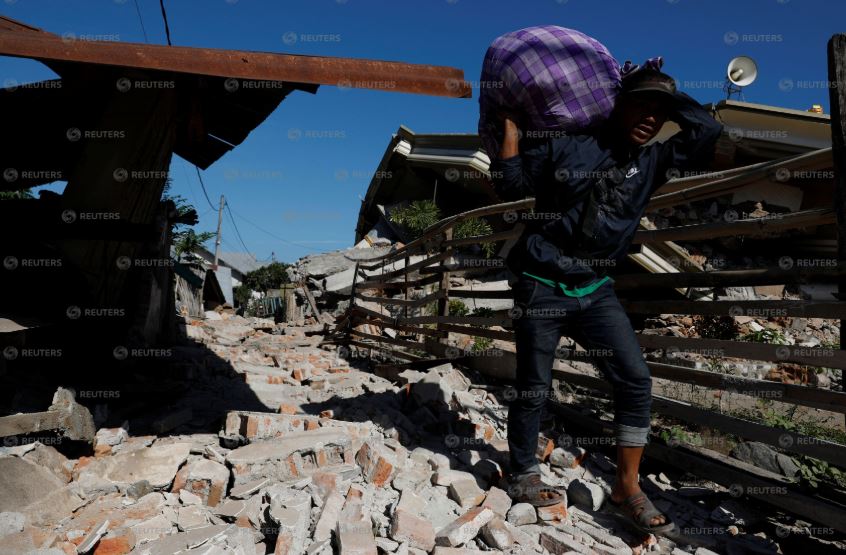 Indonesian rescue workers and military personnel resumed their search for survivors and evacuated more victims on the tourist island of Lombok on Tuesday, two days after a major earthquake killed dozens, destroyed villages and stranded thousands.

The death toll since the 6.9 magnitude quake on Sunday has reached 98, including two on the neighbouring island of Bali, and officials expect it to rise.

Sutopo Purwo Nugroho, a spokesman for Indonesia’s disaster mitigation agency (BNPB), said on Twitter rescuers were combing through rubble in their search for survivors.

In a separate statement, BNPB said rescue efforts faced difficulties in the worst-hit area of northern Lombok but provided few details. Nugroho told a news briefing on Monday some areas there were cut off after bridges collapsed.

Riduan, a 45-year old man whose house in Karangkauhan on Lombok was partially destroyed, said he had received no aid so far and had to buy food on his own.

“We don’t get anything,” he said while trying to rescue documents from his house.

Quakes continue to rattle the island, including a 5.5 magnitude tremor at around 2 a.m. (1800 GMT Monday), Indonesia’s meteorology and geophysics agency said (BMKG).

A total of 230 aftershocks were recorded by Tuesday morning, BMKG data showed.

Lombok had already been hit by a 6.4 quake on July 29 that killed 17 people and briefly stranded several hundred trekkers on the slopes of a volcano.

Tourists were still leaving Lombok on Tuesday, some seen riding in military buses while others took ferries to Bali to the west of Lombok.

Officials said more than 2,000 people had been evacuated from the three Gili islands off the northwest coast of Lombok, where fears of a tsunami had spread soon after the quake.

Tourists and Gili residents alike were seeking to leave the islands, according to Indonesia’s search and rescue agency.

There was no official figure for how many tourists were on the islands, with numbers jumping from an original estimate of about 1,000.

Indonesia sits on the Pacific Ring of Fire and is regularly hit by earthquakes. In 2004, the Indian Ocean tsunami killed 226,000 people in 13 countries, including more than 120,000 in Indonesia.