At least 324 people have so far contracted the disease and four deaths were reported in India due to coronavirus, according to official data on Sunday.

While the curfew is voluntary and is not an outright ban on the movement of people, Modi’s national appeal for social distancing has helped dramatically reduce the number of people taking to India’s densely crowded streets.

In Spain
Spain warns the ‘worst is yet to come’ as coronavirus deaths surpass 1,300 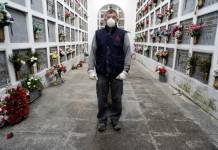 Experts have warned that the country’s cases are growing at rates seen during the early stages of the outbreak in other countries, which subsequently reported exponential increases in infections.

With over 1.3 billion people, India is trying to battle a pandemic with limited resources.

Minutes before the self-imposed curfew kicked in, Modi said the curbs would help authorities better fight the COVID-19 menace.

In India’s financial capital, Mumbai, where millions of people depend on urban rail systems, only workers involved in essential services were allowed to travel on truncated services.

Modi has requested citizens to stand at balconies and near windows on Sunday evening to clap and ring bells to praise emergency personnel and sanitation workers who are at the frontline in the fight against coronavirus.

India has cancelled most entry visas for people flying in from other countries.

Russia steps in
Russia to send help to Italy