Brexit cleared its last formal hurdle in Brussels on Thursday, setting Britain’s Jan. 31 exit from the European Union in stone, but it was an unceremonious moment and a party in the heart of the EU’s capital to say “au revoir” was a rain-drenched washout.

The 27 EU member states that Britain will leave behind at midnight in Brussels on Friday approved the withdrawal agreement reached last October after more than three years of tortuous negotiations.

Their green light came by so-called “written procedure”, shorthand for an email from each member state. 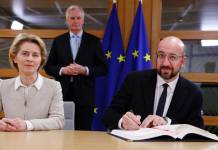 That stood in stark contrast to the emotion and drama that gripped the European Parliament’s vote on the historic agreement on Wednesday, as British Brexit Party lawmakers cheered and waved mini Union Jack flags, while others wept over Britain’s departure from the EU after nearly half a century of membership.

Britain will no longer be an EU member state from Saturday, and it will be considered a third country.

However, it will enter a transition period until the end of December that is meant to give citizens and businesses time to adapt. During the transition, Britain will continue to apply EU laws but will no longer be represented in EU institutions.

A concert organised by the City of Brussels to celebrate its friendship with Britain got off to a miserable start on Thursday as rain lashed the majestic Grand Place.

Tourists scurried across the square as music blared before a light show that would project the colours of the Union Jack onto buildings. There was a London black cab on display and a traditional British red telephone booth that had to be covered over with plastic sheeting because the rain was leaking through.

Nearby, the famous statue of a little boy urinating – the Manneken Pis – had been dressed in a Union Jack waistcoat.

A more raucous party is planned for later in the day at the bar-lined Place Luxembourg, a few steps from the EU parliament.

Brexit Day will be more muted in Brussels than across the Channel, where its supporters in London’s Parliament Square will celebrate their triumph 3-1/2 years after a referendum in which Britons voted to leave the EU.

A Union Jack in the building of the European Council will be lowered at 7 p.m. time (1800 GMT) on Friday, and put away with the flags of non-EU countries.

“They have to keep them in case Boris Johnson ever wants to come here,” said an EU official, who declined to be named.

The European Parliament plans to place one of its British flags in the House of European History, a nearby museum that recounts the history of Europe since 1789.

At the U.K.’s Representation Office in Brussels, the EU flag will be lowered at the end of the working day on Friday. On Saturday the name plate outside the building will be replaced, and it will now be known as the U.K. Mission to the European Union, which some have already dubbed “UKmissEU’.