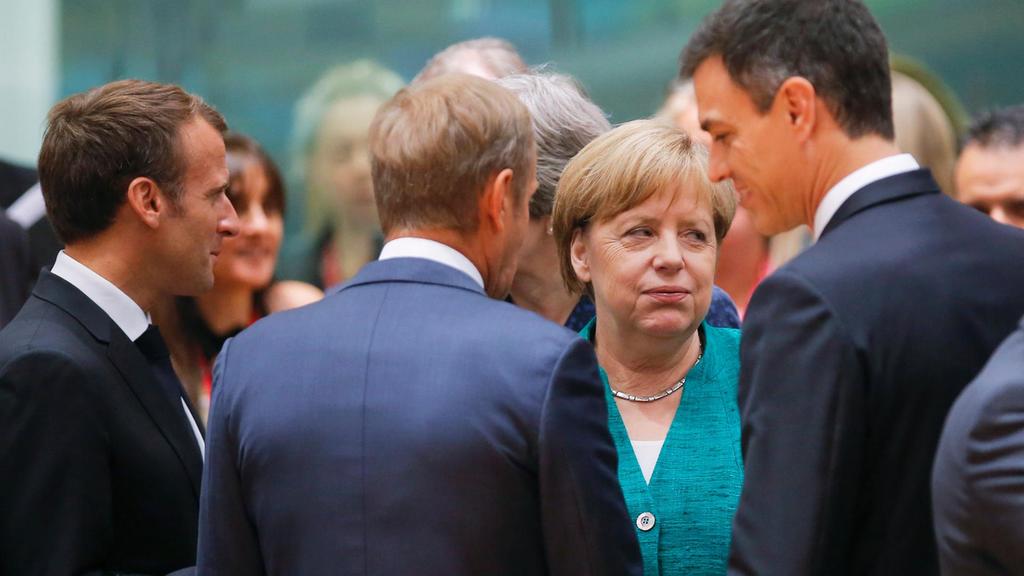 European Union leaders on Friday claimed success in reaching a hard-fought agreement to control immigration but it faced instant criticism as vague, hard to implement and a potential threat to human rights.

Irregular migration has fallen steeply since 2015, when more than a million people entered the EU, but polls show it is still a top concern of the EU’s 500 million citizens.

German Chancellor Angela Merkel and Italy’s new Prime Minister Giuseppe Conte are under heavy pressure at home to ensure fewer people from across the Mediterranean end up on their soil, and east European leaders are bitterly opposed to taking them in.

The summit of all 28 EU leaders almost ended in acrimony as they pulled in opposite directions, met and broke off repeatedly throughout Thursday night, unable to reach agreement until dawn on Friday.

They agreed to tighten further the EU’s external borders and spend more money on projects in Africa intended to deter migration. But the wording of their joint statement was highly convoluted – a result of their diverging priorities.

“Europe decided, even if it takes her time. Europe wants to protect its citizens but also wants to live up to its laws and its history and the protection of the most vulnerable,” said French President Emmanuel Macron, who helped seal the deal after nine hours of talks.

Merkel has been seeking breathing space in a showdown with her coalition partner, the Bavaria-based Christian Social Union (CSU), who demand tougher controls on immigration.

She called the summit agreement a “right step in the right direction”.

“What we achieved here together is perhaps more than I had expected,” the EU’s longest-serving leader told reporters.

Conte, who demands that other EU states do far more to help Italy with migrants, hijacked the summit for several hours. He said later he had not promised Merkel Italy would take back people who have reached Germany after passing through Italy.

Such “secondary migration” is not supposed to happen under EU rules but has proven unstoppable inside Europe’s zone of control-free travel.

Conte stormed his first-ever EU summit with an initial threat to block any and all agreements from the gathering – which also touched on trade, security, Brexit and euro zone reform.

That forced the all-night negotiations and won praise from his hardline interior minister in Rome, Matteo Salvini.

Eventually, Conte secured language he said meant Italy would no longer be solely responsible for all the people rescued at sea, while Merkel won wording on combating secondary migration, which she needed back in Berlin.

The chairman of EU summits since 2014, Donald Tusk, said it was one of the most difficult rounds of talks of his career.

“It is far too early to talk about a success. We have managed to reach an agreement,” Tusk told a news conference. “But this is in fact the easiest part of the task, compared to what awaits us on the ground, when we start implementing it.”

Lithuanian President Dalia Grybauskaite admitted it was “a success” that the countries did not fall out with each other completely, while Spain’s new Prime Minister Pedro Sanchez said it “wasn’t the best agreement … but it was an agreement”.

Their two countries represent two rival sides of the row. The coastal states on the Mediterranean want their EU peers to take in some new arrivals.

The ex-communist states in the EU’s east – led by Poland and Hungary – have mostly refused to host any migrants. That upsets wealthy destination countries like Germany as well as the southern countries.

The summit agreed any relocation of people across the bloc would only be voluntary, a welcome breakthrough for the easterners. Some diplomats said the compromise made the migration agreement contradictory and weak.

The EU offered more money for Syrian refugees in Turkey and EU agreed to seek a broad migration deal with Morocco. A 2016 one with Ankara cut off sea arrivals to Greece.

United Nations data shows only about 45,000 people have reached the EU by the sea so far this year, as the bloc has gradually grown more restrictive.

At the summit, EU leaders agreed to look into setting up sites around the Mediterranean – both inside and outside the EU – to handle asylum claims and send back those whose requests fail.

EU officials insist such places would not amount to “camps”.

The issue drew quick criticism from the charity Oxfam, which said EU leaders “respond to internal rows by reducing the space for asylum seekers” and “offload their responsibilities to countries outside the EU”.

To avert such criticism, the EU wants the U.N. agencies for refugees and migration to run such sites.

It was a sign of the depth of the EU’s divisions over migration that the crisis in Brexit negotiations came far down the summit agenda.

Leaders of the other 27 EU countries were united in stepping up the pressure on British Prime Minister Theresa May to overcome rifts in her government and move forward with all-but-stalled talks. There are only nine months to go before Britain leaves the EU.

“This is the last call to lay the cards on the table,” summit chairman Donald Tusk told reporters.

In other summit business, European Commission President Jean-Claude Juncker said he would visit Washington at the end of July in a bid to ease trade tensions after EU leaders pledged to react firmly against protectionism.

They also agreed on Friday the ESM bailout fund should play a bigger role in a more integrated euro zone, but left the details of that to December and difficult issues like a euro zone budget or deposit insurance for an undefined future.

Deeper euro zone integration has been championed by Macron since his election last year, but has run into opposition from Germany and its allies, wary of sharing more responsibility with other governments.