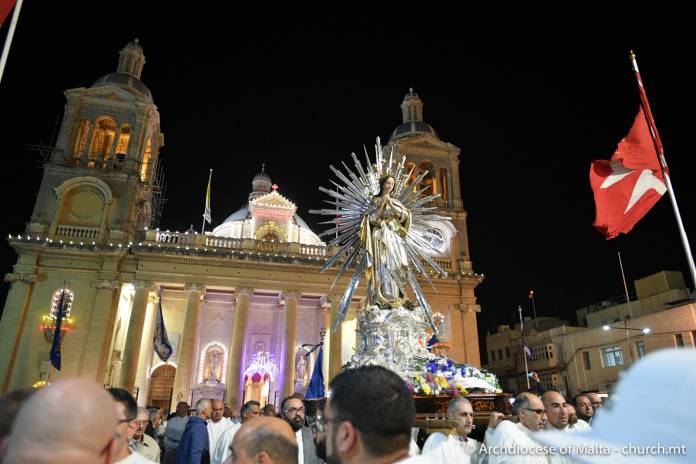 Archbishop Charles Scicluna, speaking to the thousands who thronged the parish church of Paola as they prepared to take back to their hometown the statue of the Immaculate Conception, emphasised good neighbourliness.

A journey back in time

The event on Saturday, culminating in a pilgrimage of grace from Paola to Cospicua recalled a similar journey the same statue had made after World War 2. Due to the heavy shelling which the Three Cities endured in the Blitz at the hands of the Axis forces, the statue of Our Lady of the Immaculate Conception was taken to a safer location: Birkirkara. There it stayed for some two years, during which time all processions and bell ringing had been banned for safety. When it was deemed safe again, the statue had been taken processionally shoulder high from Birkirkara to Cospicua. This dramatic episode in Malta’s history was re-enacted over the past few weeks when the Statue was again taken to Birkirkara for a few weeks. On Saturday, Archbishop Scicluna celebrated pontifical mass at the Paola Parish church in honour of this historical memory.

With the statue having found refuge in another, safer haven, Archbishop Scicluna centred his message around the words of Christ: What you do to the least of my brothers, that you do unto me. He emphasised Mary’s total commitment to God, “this chaste young woman…who answered God’s call saying ‘I am the handmaid of the Lord”. Archbishop Scicluna said that the Blessed Virgin kept faith, always referring people to her Son. He said that it was fitting that the last part of this pilgimage was to start from a churc dedicated to her son, Christ the King.

Giving the nod to the fervent devotion which the people of Cospicua show to their statue, Archbishop Scicluna smilingly referred to the emotional welcome this statue’s return was being given. He reminded the congregation that, unblemished by sin as Mary was, we are not. The return of the statue to Cospicua, said the Archbishop should remind us of the need to be good neighbours and to do to others as each one wuld want other to treat them.