The Institute of Maltese Journalists (IĠM) condemned Minister Silvio Schembri’s “bullying” tactics towards a journalist who asked him about former Prime Minister Joseph Muscat’s involvement after being consulted by the Government with regards to the economic impact of coronavirus.

Following the press conference which took place on the 6th of May, the Minister, the Institute explained, posted a video on his Facebook account, in which the journalist’s question was edited, while prominently captioning the journalist’s name and the media house he works with. This video was pinned at the top of the Minister’s page for more than two days, reaching around 30,000 views, over 1K reactions and around 400 comments. It was also put on the Minister’s Instagram account as a 24 hour story. On Thursday, the edited video was aired on the programme Pjazza on One TV.

According to the Institute, this incident is another example of bullying toward members of the press by a prominent politician. In a press release it explained that while politicians have every right to state their side of the story, they are obliged to reply and should never make the journalist the subject of the story.

IĠM stated that it will not tolerate such actions that only instigate hatred towards journalists. “Journalists cannot be used as bait by politicians to gain political mileage and to increase their popularity amongst the public. The intentional editing of the said journalist’s question shows a level of disrespect towards journalists, whose duty is to ask questions in order to serve the public. Such incidents also create an intimidating situation, where journalists are exposed to harassment online.”

IĠM, therefore, reiterated its call for politicians to lead by example and to send a clear message that such actions are unacceptable. 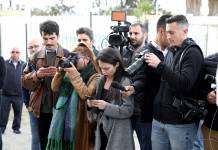