We are, mostly, all capable of some empathy or sympathy. We feel sorry for strays, for ‘those less fortunate’, for ‘the missions’. All good things in themselves. The problem starts when these issues become more tangible when they start having a face, a body, when we start actually meeting them and interacting with them. Then we realise that very often what divides us from them is nothing but sheer fortune, good or bad, depending on which side of the fence you happen to be sitting.

Fr Karm Aquilina was not ready to sit with a cuppa and watch the misfortunes of others unfold and commiserate from the warmth of his blanket. His mission is Dar Suret il-Bniedem which provides a roof over the heads of those who seek it.

“Fr Leopold was the founder of this mission when he set u Welcome Home in Fgura for those who had just been released from prison,” said the Capuchin friar as Newsbook.com.mt caught up with him in rolled-up sleeves, ever on the go. That was the mid-90s and the journey developed a simple home into a foundation for homeless men. Later the foundation opened also Dar Tereza Spinelli for homeless women.

Homelessness is not just due to release from prison. Fr Karm said that the issue of homelessness has been around for decades and there are several reasons which end up causing a person to live on the street. Fr Karm’s next words quickly set about dispelling convenient myths which are frequently generated to mollify those who are comfortably ensconced in their own home. 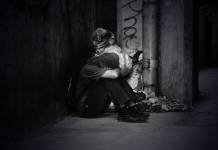 Homelessness, explained the friar, is frequently due to various failures: failure of a relationship, a business, loss of employment, addiction, mismanagement of resources. He said that rocky relationships in a family may lead to people leaving home without having the necessary resources to support their independence. Separations too may cause homelessness since sometimes alimony may be too steep for a person to keep up while having a decent home. Addictions such as gambling, drugs or alcohol bring about homelessness and these are perhaps the most traditionally acknowledged sources.

The elephant in the room, when talking about homelessness is the migrant issue. “The smallest cohort in our homes is from people coming from the African Continent,” said Fr Karm, quickly dispelling the displaced immigrant cliché. He added that Romanians, Italians, British, Germans, Serbians have all sought the help of the friars. Sometimes these people think they can find a job quickly and when that does not happen, their money runs out and they need help.

In a home where up to 17 men congregate, discipline is paramount. Different nationalities, different backgrounds, different cultures different characters may make for an explosive situation. Discipline, said Fr Karm, is key. He told Newsbook.com.mt a little story of a man who jumped curfew and wandered in the following day. Fr Karm recalled being very severe with him, not allowing him to try to fob the friar off with some cock and bull story. “Finally, he started crying. ‘I wish I had had a father like you’ he told me,” said Fr Karm, still clearly touched by the episode.

Respect is also a fundamental ingredient. Fr Karm said that religion is not a factor in gaining access to the house. He said that being rendered homeless is a huge humiliation. He said that the homes seek to give these people a safe space which they can call their own, at least for a limited time. Respect for various cultures and creeds is a basic tenet of the homes and those in their shelter can stay until they find a viable alternative. With regards to women, the sensitivity has to be greater since they can sometimes bring with them, children. “This does not mean we never had problems but we have always tried to make sure that they come round to mutual acceptance,” said Fr Karm.

One final note: Fr Karm warned the homeless to be wary of exploitation from those who would seek to take from the destitute the little they have. He said that the wheel can turn around and people who sought their help have managed to reconstruct their lives. No one is exempt from the peril of homelessness, concluded Fr Karm but the possibility and hope for a better future really exist.