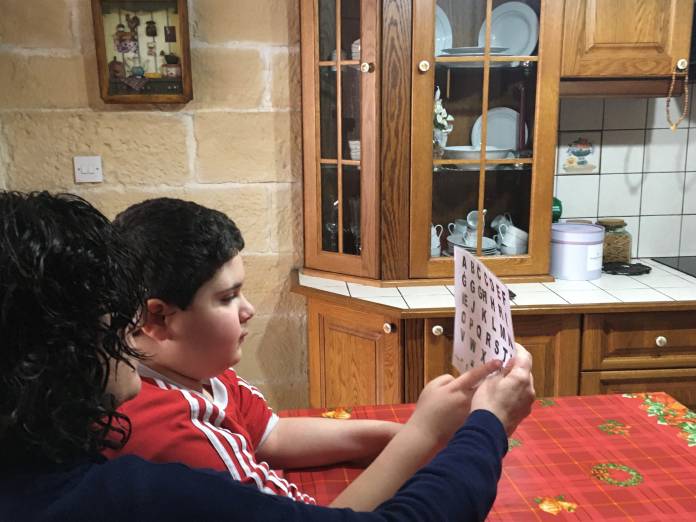 Being transported to space is the dream of a 9-year-old boy with non-verbal autism, who succeeded in documenting his journey in a book being launched today to raise awareness about his condition.

In his message, Beppe Caruana told Education Minister Justyne Caruana that he wants everyone to believe in people like him, and to recognise their abilities, not be distracted by their disability.

“I want to show everyone I’m not stupid,” Beppe told his mother Olivia Galea Seychell, when she asked him if he was certain about being present at the virtual launch of his book, titled Il-Mawra Tieghi fl-Ispazju (My Holiday in Space).

Beppe is a highly intelligent boy, but it took a while before his parents found the right communication methods to unlock his potential and step into his world.

With training in Rapid Prompting Method and communicative devices donated by the Malta Trust Foundation’s E3 project, Galea Seychell discovered that her son’s reading was more advanced, that he had a grasp of the Maltese language and was a very quick learner.

The book highlights Beppe’s desire to travel to space where he will no longer be weighed down by gravity; an escape to a place where he can be rid of all that upsets him.

“Space was all I had imagined it to be; I felt at one with the universe. All obstacles had disappeared. I could shout and clap freely without anybody staring at me,” he writes in his book.

His next storybook is about his escape to the sea, another one of nature’s assets, which unshackles Beppe from the weight and misunderstandings of everyday life.

Illustrated by Nasim Dardouri, the book will go on sale this week and will be distributed to Year 5 students by the National Literacy Agency, which supported the publication of this book.

Malta Trust Foundation president Marie-Louise Coleiro Preca said: “Beppe’s book is a clear example of the immense capabilities of these children and helps to break the stigma surrounding disability. I thank all the partners and entities who have come together to support our E3 project.”

The E3 project — which aims to empower, encourage and educate young children with different abilities — is run in collaboration with the National Literacy Agency, the Foundation for Inclusive Technology and Accessibility, Agenzija Sapport, the Department of Speech and Language Pathologists, the Association for Speech-Language Pathologists Malta and the Autism Parents Association-Malta.

Towards the end of last year, 30 children, including Beppe, who are non-verbal and on the autism spectrum, benefitted from individual electronic devices to support their learning, after the Malta Trust Foundation’s E3 project raised €84,283.

The augmentative communication devices were procured and individually tailor-made for the children who were identified by the Education Department, together with Agenzija Sapport’s unit, ACTU, which provides them with personalised training.

Set up in 2015 by President Emeritus Marie-Louise Coleiro Preca, the Malta Trust Foundation brings together renowned and experienced businessmen, academics and professionals to create collaborations that make a tangible impact to youngsters facing difficult situations.

Watch: “My son has autism; getting a dog changed his life”

Watch: Growing up with autism was a challenge and an opportunity – Blaine

Schools inclusion policy should not treat everyone the same – Autism experts