It is not only the environmental organisations and NGOs that are against the deal which gives the hunters’ lobby large stretches of public land in Miżieb and L-Aħrax tal-Mellieħa but society in general, said environmentalist Dr Claire Bonello, during Prof. Andrew’s Azzopardi programme aired on Saturday on 103 Malta’s Heart.

Earlier this month the government signed off the management of Miżieb and Aħrax woodlands in Mellieħa to the hunters’ lobby.

Interviewed by Prof. Azzopardi Dr Bonello said that with this deal the government showed how its only interest is to keep a section of our society happy at the detriment of a better quality of life and of our environment.

Dr Bonello said that it is true that hunting is considered as a hobby but it is also true that that lobby group is stealing nature from the public. She continued saying that unfortunately we have a government that steals public land and an opposition that does not commit to deal with the situation. “It will always be younger generations who will lose parts of the beauty of nature,” said Dr Bonello.

“Environmentalists are a small lobby group”

On the same issue, Prof. Azzopardi contacted the Chief Executive Office of Birdlife Malta, Mark Sultana. Last week the NGO held a press conference explaining how hunters and trappers are once again being granted with privileges on completely wrong premises and that this is unacceptable. 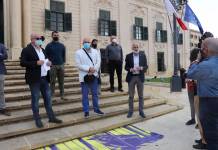 Mark Sultana explained how environmentalists are not a large lobby group which can exert pressure on the government as the environments includes a wide spectrum of issues that need to be tackled whilst for the hunters’ lobby it is much easier to say ‘No Hunting, No Vote.”

Birdlife’s CEO said that this agreement is unacceptable as it is a large area given to around 300 hunters whilst the rest of the population, are deprived from enjoying nature for free.

The PN has issues with the agreement – MP David Thake

“The Nationalist Party is not against any type of hobby such as hunting but to give such a large stretch of public land to one particular lobby is not acceptable. I personally do not agree,” said PN MP David Thake.

During the programme on 103 Malta’s Heart, Thake said that the PN has issues circling around the agreement the government signed with FKNK behind everyone’s back.

Pressed by Prof. Azzopardi to give an answer as to what would the PN in government do with this scenario, David Thanke said the PN would meet will all stakeholders and will try and reach a compromise. The PN MP also said that at this stage the PN cannot commit to give a straight answer and declare that under a PN government the agreement would be declared null and void.

“I understand why people are infuriated” – Minister Farrugia

Presenter Prof. Andrew Azzopardi told Minister Aaron Farrugia that he is not convinced that he would have agreed to grant FKNK such an agreement but feels that as Environment Minister he was pressured to do so. Minister Farrugia replied that in politics unfortunately one cannot please everyone.

Farrugia explained that there was an additional agreement between ERA and FKNK and which he signed which stated that FKNK had to manage the areas well.

Minister Aaron Farrugia also mentioned that public spaces at Miżieb and l-Aħrax, such as the public pathways, the picnic areas and camping sites are still accessbile to the public.

He also said that he can understand how such an agreement has infuriated many as people want more green areas and “I have committed myself to provide people with more open spaces,” said Environment Minister Aaron Farrugia.

Watch: Two juvenile flamingos released back into the wild