Kaċċaturi San Ubertu has assisted in the release of two juvenile flamingos at the Għadira Nature Reserve. Both birds were originally retrieved by hunters.

In a statement, the group noted that the birds were handed over to the E.P.U. Environment Protection Unit (formerly known as the ALE) and passed on to Birdlife Malta for rehabilitation.

It added that it is quite common for young birds to separate from their flock during migration. When finding such birds, they remarked that hunters or members of the general public are to inform the Environment Protection Unit by calling 119.

The retrieval of one of the flamingos:
Watch: Juvenile flamingo ‘turned in’ to police 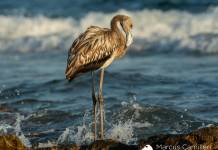