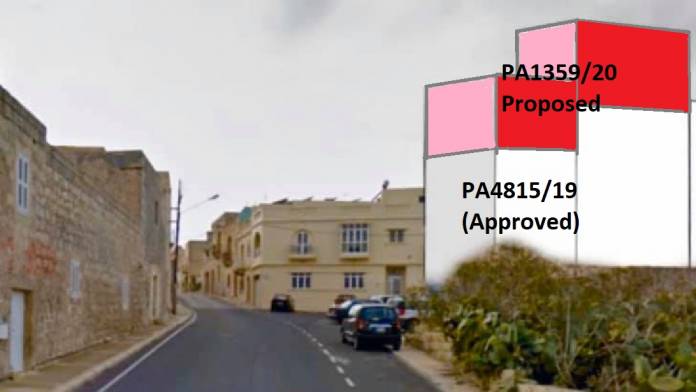 A development application submitted at what may be considered to be the entrance to the (so far) quaint old village of Dingli is raising the anger of the villagers. The application, PA 1359/20 seeks to extend on a previously approved application to obtain the maximum building height permitted by law.

In May 2019, in PA4815/19, Mr Chris Schembri applied for the “Proposed demolition of the existing premises retaining part of the façade and construction of maisonette and garage at ground floor, apartments at first and second floors and overlying washroom”. The site is at the moment occupied by a typically Maltese vernacular structure on one floor, in a style that typifies the rurality of the village. This application was approved: the application was within scheme and within the building height limitation.

Earlier this month, on the 4th March 2020, another application was filed, PA1359/20 to extend on the approved application. Bordering the ODZ as it does, this prime piece of land has considerable potential for ‘views’ over a large swathe of Malta. This new application adds height to the already approved application: “Proposed addition of a duplex penthouse including construction of splash pool overlying maisonette and garage at ground floor and two apartments in first and second floor approved in PA 4815/19”. This application too seems to be within the parameters of the law. Or is it?

At this point, a look at the Local Plan building height limitations for Dingli would be most helpful. The site is just outside the boundary of the Dingli Urban Conservation Area. Usually, such a demarcation line is plotted in the middle of a street, signifying that one part of the street is within the UCA while the other is not. In this case, the PA went a step further. The UCA demarcation line follows the line of the property in question. This means that, while the property is not within the UCA, it has to follow UCA characteristics and the development must provide a suitable transition. Indeed, the local plan NWCO1 states:

“…MEPA has reviewed these designations to take into account developments that have occurred since 1996 and has identified those parts of the UCAs, which are extremely important to the heritage of the locality and therefore highly sensitive to interventions…”

This principle was further strengthened in the design document DC2015:

“Specifically where development is sited immediately adjacent to the UCA, it will not be higher than the height of the predominant buildings located within the stretch of the perimeter block … so as not to visually dominate the streetscape or other spaces within the UCA”.

Observers close to the Planning Authority said that it is difficult to see how the proposed planning mass could provide a suitable transition and respect the UCA it is in such close proximity to. Even with the current application as approved, this would be difficult, said a practising architect on condition of anonymity, let alone with such a massive development.

Indeed, the North West local Plan is not respectful of this quaint old village. While the UCA was, to all intents and purposes, retained intact, at least in principle, the village was practically buried through new development. The Building Heights limitations for Dingli go in the inverse direction normally adopted in urban design. The massing proposed in the Local Plan effectively creates a ‘valley’ with the UCA, the heart of the village, as the lowest point surrounded by a much higher perimeter. “Integrating new development into existing landscape setting reduces its impact on nature and reinforces local distinctiveness,” noted our source, adding that in the case of Dingli, the very opposite was true.