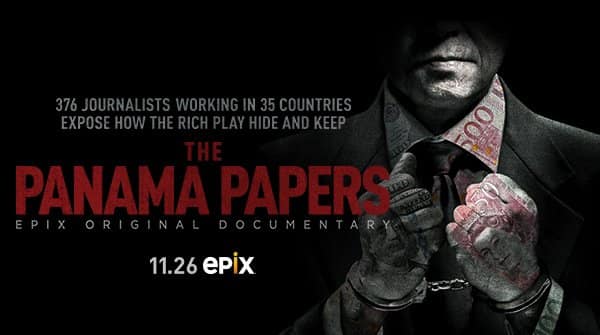 Whistleblowers and investigative journalists lie at the heart of exposing the secrets of those who commit wrongdoing; in the case of Panama Papers, of exposing the 140 politicians from more than 50 countries connected to offshore companies in 21 tax havens, buried away in 11.5 million secret files. In short, of exposing income inequality due to the way in which the wealthy exploit financial secrecy to hide assets and avoid taxes. Particularly in the light of the murders in Europe, including that of Maltese journalist Daphne Caruana Galizia, and the arrests in Myanmar, this risky business is documented in the new Panama Papers film.

Alex Winter, director of the documentary, explained how he traveled to Russia, Panama, Germany, London and Iceland to interview several of the International Consortium of Investigative Journalists’ partners who worked on the 2016 investigation, around 380

reporters who helped to piece together the exposition. John Doe’s story, the anonymous whistleblower who turned over the 11.5 million Panama Paper documents, will also feature.

The film seeks to answer: why does it matter that many in the 1% don’t pay their taxes? Winter stressed that if there’s one message he wishes people to take away from the film, it’s the fact that the 1% doing this prevent the vast majority of the world from being able to function properly, and that the person watching can have a hand in solving that.

The film will be shown for the first time at the Hamptons International Film Festival, on October 4th. It will also be shown at the Double Exposure Investigative Film Festival in D.C. on October 14th.

Sarah Borg   February 17, 2020
The European Parliament's call for applications for the European Citizen’s Prize 2020. The call is also open for those who would like to nominate somebody else for exceptional projects they have carried out.

Monique Agius   February 16, 2020
Last week, French prosecutors announced that they have started an investigation into the business activities of murder suspect Yorgen Fenech. The inquiry in Paris is a response to allegations by the Caruana Galizia family that Fenech used cash from property deals and racehorses in France to bribe Maltese officials.

Martyrs’ Shrine honors 21 victims of ISIS on fifth anniversary of...