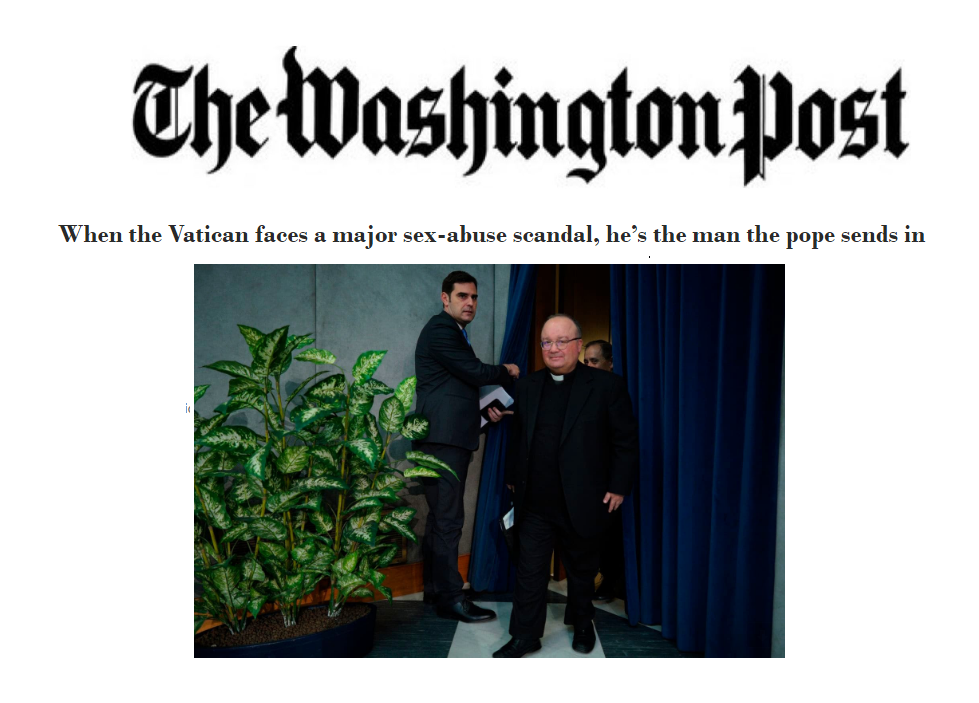 Archbishop Charles Scicluna was pithy. “Nothing prepares you for the wounds,” Scicluna told Chico Harlan of The Washington Post. “You don’t get used to it.” In a candid interview with this major world class newspaper and substantial background work, a clearer, more complete view of a person whom we in Malta see as Archbishop, emerges.

Working to the direct mandate of the Pope, indeed a lunga manus of popes as the authoritative La Croix described him a few months ago, Scicluna is no run of the mill archbishop.

Archbishop Scicluna’s missions usually begin with a phone call from the pope. Asking him to “Do me a favor”.  Scicluna knows that he has to pack his bags and books a flight to another country where something terrible has happened. Indeed, over the past fifteen years, Scicluna has been instrumental in outing abuse: from Marcial Maciel to the Chilean debacle, Scicluna was described by the Washington Post as  “…interviewing hundreds of victims, during feverish days he likens to an “ant working in summer.” He has carried out special investigations on behalf of both Francis and his predecessor, Pope Benedict XVI, and he considers his missions a “service” for the pontiff, wrote Harlan. “You have your own ideas of how things should proceed,” Scicluna said. “But you know that you are not the owner of what you are doing.”

The Washington post wrote that in interviews in his home country of Malta and inside the Vatican Scicluna said he “hoped and prayed” that the institution, during his lifetime, can “become an example of best practices” for responding to and preventing abuse. “But we will not solve the problem,” he said, calling abuse a pervasive global issue that goes beyond the church. “This will not go away.”

He Cared. It mattered to him

Scicluna, wrote Harlan, has developed a reputation — even among some wary abuse victims and advocates — as one of the rare Vatican officials who appreciates the seriousness and scale of the church’s abuse crisis. “Victims say Scicluna presents himself as a listener and fact-finder, sensitive but also meticulous in pinning down dates and specifics” assessed the journalist.

“He cared. It mattered to him,” said Juan Carlos Cruz, a whistleblowing Chilean abuse victim now living in the United States, who met with Scicluna last year. Cruz had volunteered to speak with Scicluna via Skype. Instead, Scicluna flew to New York and spoke with Cruz for four hours.

“I’ve been telling my story and dealing with church officials forever,” Cruz said. “It was the first time I felt empathy.”

But, wrote the Washington Post,  Scicluna is also fully a man of the institution, not a radical. “He points to past papal quotes as guiding wisdom for handling the crisis. He chides the church gently, prescribing reforms for handling complaints, urging prelates to listen more openly to victims. He speaks about the importance of transparency and encourages church officials to cooperate with civil authorities, but his own investigations are fully in-house, and not even summaries of his findings are made public” wrote Harlan.

A ’tsunami’ of sexual jargon

When he arrived in the Vatican in the mid-1990s, wrote Harlan, he knew barely a word of sexual jargon. He said he became versed in clerical abuse only because the church was confronting a “tsunami” and needed help.

One of Archbishop Scicluna’s first investigations, reported the Washington Post was indeed a baptism of fire. He first went to Mexico and the United States in 2005, documenting the serial abuse of Marcial Maciel, the charismatic founder of the conservative Legionaries of Christ whose work had been repeatedly praised by Pope John Paul II. His pilgrimage tok him to Syria, Scotland, Chile and the US, among other places.

Harlan wrote that Scicluna has been confronted with various theories about the causes of abuse within the Catholic Church. He dismisses the popular notion that the priestly celibacy requirement leads to a culture of sexual secrecy, because it gives even priests who have consensual relationships something to hide. But he does say that some clerics fail to develop mature ways to show affection, and then feel “protected in the status and the ritual” of the priesthood.

The heart of the matter

For Scicluna, wrote Harlan, the more difficult question — one that he is cautious about addressing — is what to make of data showing that clerical abuse victims are predominantly male, and often teenagers.

“People invariably make the link with same-sex attractions,” Scicluna told The Washington Post.  Vatican traditionalists argue that the hidden homosexuality of some priests is a major underlying reason for the abuse crisis. Scicluna has been prodded several times by journalists from conservative Catholic outlets to agree, but he has always stopped short. Studies have found no correlation between sexual orientation and abuse.

“I don’t think you can pinpoint only one set of causes,” Scicluna says. “This cannot be a judgment about a category of people.”