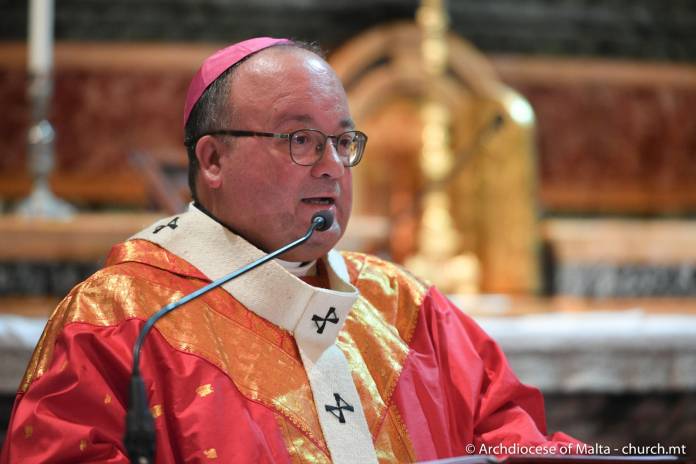 Archbishop Charles Scicluna challenged the Maltese to reflect before answering a fundamental question: Have the Maltese lost the fear of God? The Archbishop was delivering his homily on the occasion of the Feast of Christ the King which was celebrated at St John’s Co-Cathedral Sunday evening. During the same homily the Archbishop commented on the reading from the Gospel of Luke which sets forth three temptation that were presented to Jesus Crucified.

We cannot abandon the exigencies of justice

Archbishop Scicluna said that Jesus was challenged by one of the thieves for whom salvation was an egoistic endeavour. But He was defended by the other thief who had a great sense of justice. Mgr. Scicluna said that justice implies that no one has the right to escape the consequences of his actions.

The ‘good thief’ challenged the other thief: Are you not afraid of God?

The Archbishop said that the fear of God means that before one acts one asks oneself: Where is God in what I am doing?

When money is preferred to God we destroy ourselves said the Archbishop. We should respect those who do not agree with us not try to destroy them or even kill them

The temptation of the doctors of the law

Archbishop Scicluna said that the first temptation Christ Crucified had to abandon the will of the Father was presented by the religious leaders.

“Instead of trying to interpret the will of the Father they ridiculed His Son”, said Scicluna.

Jesus, said the Archbishop, answered the doctors of the law that mercy and love are more important than the law and rituals.

Religious leaders today pose the same temptation to Jesus when they build walls between the living and the dead or when they condemn or try to ridicule.

“We are your servants”, said the Archbishop adding that the Church in its wisdom says that the first sinner is the bishop and that the authority of the leaders of the Church is not build on their abilities but on the Word of God.

Cynical use of power

Christ was also challenged and ridiculed by the soldiers who understood His kingdom as a political one, said the Archbishop.

This category of the people of the state ridiculed Jesus said the Archbishop who described these officers of the stat as so cynicism that they use their power to cheat the vulnerable. For such ilk the power is a means of making money and respect no one. Scicluna prayed that the Lord free us from those who use the power of the state to take personal advantage and who think that they are above the law so much so that they think that they can kill, steal and commit injustice with impunity.

Għaqda tal-Pawlini meets the Archbishop and the President

Mario Schiavone   January 20, 2020
The Diocese of Middlesbrough and the Diocese of Lancaster have announced their commitment to divest from fossil fuels, becoming the first Catholic dioceses in...

Christoph Schwaiger   January 20, 2020
Police have arrested a man suspected of being involved in six different hold-ups carried out in January.