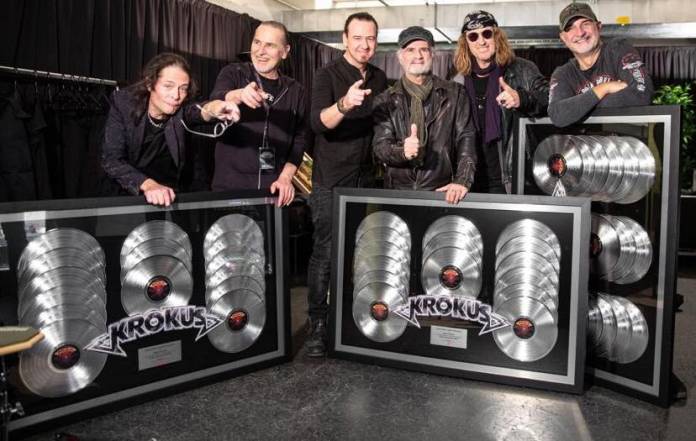 Krokus was recently awarded an award for having sold over 15 million albums worldwide by Sony Music Switzerland.

The band was founded in Solothurn in 1975 by bassist/keyboardist/percussionist (and original drummer, and then lead vocalist) Chris von Rohr and guitarist Tommy Kiefer, both former members of Kaktus. Former TEA vocalist Marc Storace joined the band as frontman in time for their Metal Rendez-vous album in 1980.

Krokus were big in the US in the ’80s and their album Headhunter was awarded Platinum album status in the United States. It hit number 25 in the 1983 Billboard 200 album chart.

The current member are Chris vonRohr, Marc Storace, Mandy Meyer and Flavio Mezzodi. They are currently embarking on their farewell tour.

Storace was born in Malta on the 7th October 1951. His musical career began at the age of 14 when he made his first live performances with two local bands – Stonehenge Union and The Boys. He also formed part of Cinnamon Hades, an offshoot of The Boys.