Opposition Leader Bernard Grech said that the government could no longer resort to its common retort – that the Opposition was being negative – in light of the many proposals it was presenting at a press conference outside Parliament on Monday night.

The press conference was held after Grech’s official reaction to the Budget, in which he deemed it to be lacking in vision and sought to present an ambitious vision for the future, in which Malta restored its reputation and placed the environment at its centre.

Grech highlighted how the government’s financial estimates appeared to be unrealistic, based on consumption patterns that appeared difficult to achieve.

He also complained that the government appeared unwilling to address existing issues, not least through its refusal to hold a public inquiry on the ElectroGas contract.

In response to a question by Newsbook.com.mt – the newsroom highlighted that the approach adopted by Grech departed from the traditional Budget reaction speech – Grech said that while he offered a general analysis of a budget which, he felt, lacked vision and was symptomatic of a tired government, he sought to go beyond.

“We showed that we are a creative, positive and proactive Opposition; one which does not stop at highlighting shortcomings or room for improvement, but also proves that it knows what we need to achieve,” Grech maintained.

At the press conference, Grech was flanked by MPs Mario de Marco and Claudio Grech, the Nationalist Party’s spokespersons on finance and economy respectively. De Marco highlighted the proposals the party had made in its pre-budget document, which were based on three binaries: helping the economy recover, developing the economy of the future and keeping in mind the social aspect of the economy.

‘Let us stop pitting health and economy against each other’

On his part, Claudio Grech highlighted how Malta had overcome the first wave of the pandemic well, only to become one of the countries worst-affected by the second. He highlighted how it was concerning to see the recommendations of health professionals – including to loosen Covid-19 restrictions cautiously and avoid holding high-risk activities – were ignored.

“Let us stop pitting health and economy against each other: one cannot work without the other” Grech maintained. “When the government speaks about the balance between health and the economy, it only shows that it fails to understand that one cannot negotiate with people’s health.”

The MP emphasised that there was no magic wand to solve the crisis.

Grech also warned that the coming weeks would be crucial, particularly for the vulnerable.

“We are reaching very difficult times, where the impact of the pandemic will be huge and possibly unprecedented,” he maintained. 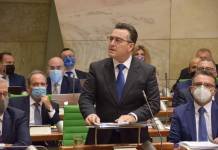