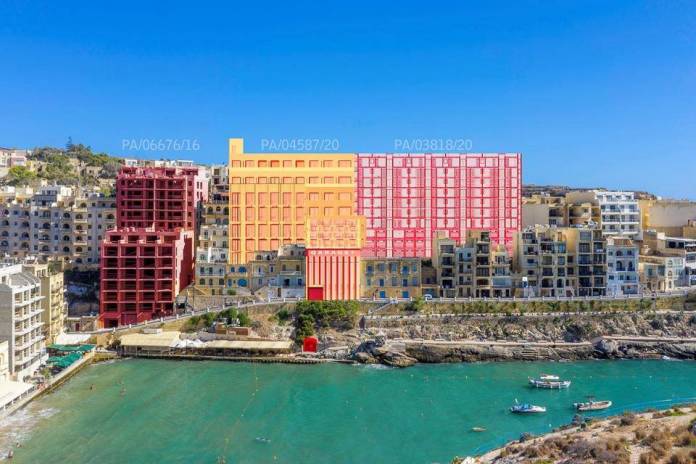 Moviment Graffitti has urged the Planning Authority to reject plans to construct an 8-storey apartment block which would tower over Xlendi Bay, on the eve of a hearing on the development application.

The NGO lamented the assigned case officer’s recommendation for approval of the project, in spite of the various objections made by concerned residents.

“If approved, this development will threaten to destroy forever the little that is left of the original, quaint character of Xlendi and turn the area into one big eyesore. This development is not the only one that is threatening to intensify the urbanisation of the area. Indeed, another massive development adjacent to the proposed apartment block, which will see the construction of a four-star hotel, is also being considered for approval by the PA,” Graffitti said.

The project in question is PA 3818/20, and foresees the construction of 56 garages with 60 overlying apartments and 3 penthouses.

“Considering that the construction of a hotel in the same area is also being eyed for approval and the construction of another massive block of apartments and garages is nearing completion, approving another huge development in the area will be tantamount to madness. Both developments are clearly excessive and out of proportion with the surroundings, and the Xlendi skyline and the traditional streetscape will be ruined forever,” Graffitti insisted.

The NGO also argued that the developments went against the Gozo Comino Local Plan, which points out that a number of touristic zones in Gozo, including Xlendi, had already been ‘considerably mutilated’ by overdevelopment.

Graffitti also flagged the adjacent hotel plans, for which one development application (PA 4587/20) has been submitted and is being vetted by the PA. It highlighted that the project, by a company directed by construction magnate Joseph Portelli, only mentioned phase 1 of the development: the “proposed demolition of existing building and subsequent excavation of site.” It highlighted that this piecemeal approach to planning has already been seen in other massive development projects.

A lack of integrated planning and overdevelopment were threatening to turn touristic areas in Gozo into a concrete jungle, with the island following in Malta’s footsteps, according to Graffitti. The NGO thus urged the PA to treat the application with care and keep in mind that further unsustainable development can result in irreversible damage.