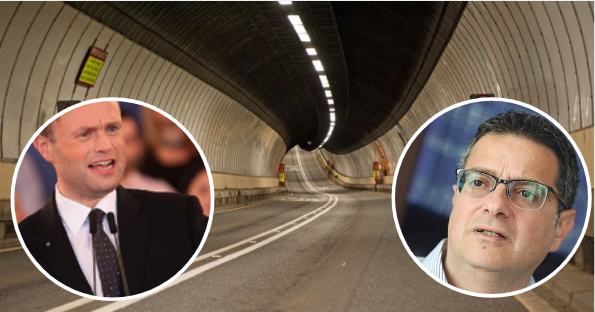 Political leaders on Sunday went head to head on the issue of connectivity between Malta and Gozo in their weekly address to the party faithful. Speaking from respective clubs in Gozo, both Delia and Muscat spoke extensively about the proposed tunnel. Muscat announced freebie trips to strategic locations in Malta while Delia accused government of starving the Gozitans of connectivity to push the tunnel proposal

Free trips to Mater Dei and the Airport – Muscat

Prime Minister and PL Leader Joseph Muscat said announced free transport to strategic locations in Malta as soon as the Gozo-Malta tunnel is completed. The examples of strategic locations mentioned by Muscat included Mater Dei Hospitals and the Airport. Speaking at the Labour club in Victoria, Muscat said that a Labour government is treating Gozo at par with Malta. He said that the delay in the project was due to what he described as the extensive studies which are being held on the matter. He described the inclusion of a rail connection as rather ‘out there’ but said that government is still examining this possibility.

You are starving Gozo of connectivity to push the tunnel – Delia

PN Opposition Leader Adrian Delia said that with Muscat in Gozo he would have welcomed a face to debate on Gozo. He said that connectivity is a prime concern for Gozitans and government has not only not consulted on the issue of the tunnel but has ‘dried up’ the various means of connectivity for the Gozitans. He said that the fast-ferry, the cargo ferry, the fourth passenger ferry have all been ditched, leaving the Gozitans short of about 100 trips daily. Delia also blamed the lack of focus on connectivity to the death of a patient who had been admitted to the Steward Health Care hospital in Gozo and died as he was not transferred by helicopter to Malta. This, said Delia, is the result of placing lucre above the needs of Gozo.