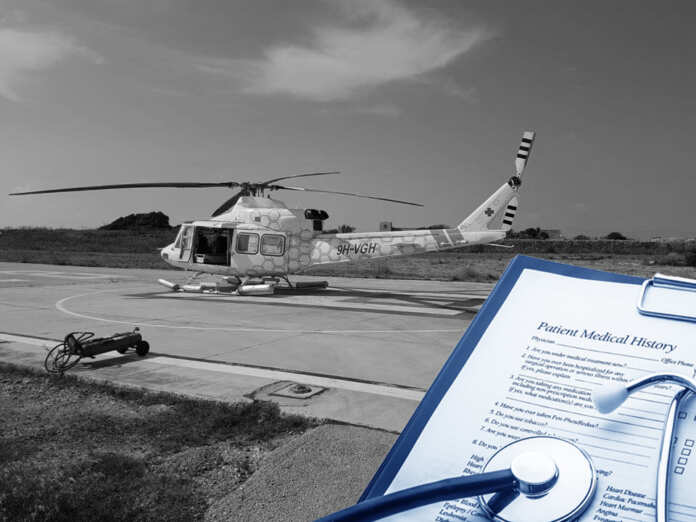 The full report into the inquiry on the air ambulance led by Professor Joseph Cacciatolo and ordered by Health Minister Chris Fearne has yet to published. Prof Cacciatolo still has to reply to the questions sent in by Newsbook.com.mt on whether the report would be published and if not, why.

Newsbook.com.mt was told by Health Minister that an Inquiry Board was set up in order to investigate the reports claiming that a person died because he arrived late to hospital due to the air ambulance not being available at that time. The reports were contested by Steward Healthcare who are now in charge of the Gozo General Hospital.

The Government only published a paragraph from the report claiming there were no shortcomings from the hospital. However the conclusions contradict the official medical documents which Newsbook.com.mt has seen.

The official medical documents clearly state that the doctors had to hospitalize the patient at the Gozo General Hospital due to the air ambulance not being available.

Official documents written by doctors at Mater Dei hospital with a time stamp at 5pm state that the patient underwent treatment at the Gozo General hospital due to the air ambulance not being available.

The Government’s Department of Information only published a paragraph out of the inquiry so it is yet to be understood whether the said documents were seen by Prof Cacciatolo.

No co-pilot flying the air ambulance

A source told Newsbook.com.mt that the air ambulance was flown to Malta without a co-pilot meaning that a risk was posed for the doctor and the nurse who accompanied the patient to Malta.

In a statement the Health Ministry said that the independent board had established there was no failure in the helicopter service at Gozo Hospital. According to the partial conclusion published the procedures used were according to protocol.

The Chief Executive of the Gozo Hospital Joe Fenech had used the same argument in a Facebook post claiming that the patient was too weak to be flown to Malta. The post reproduced by Newsbook.com.mt below however was removed two days later. 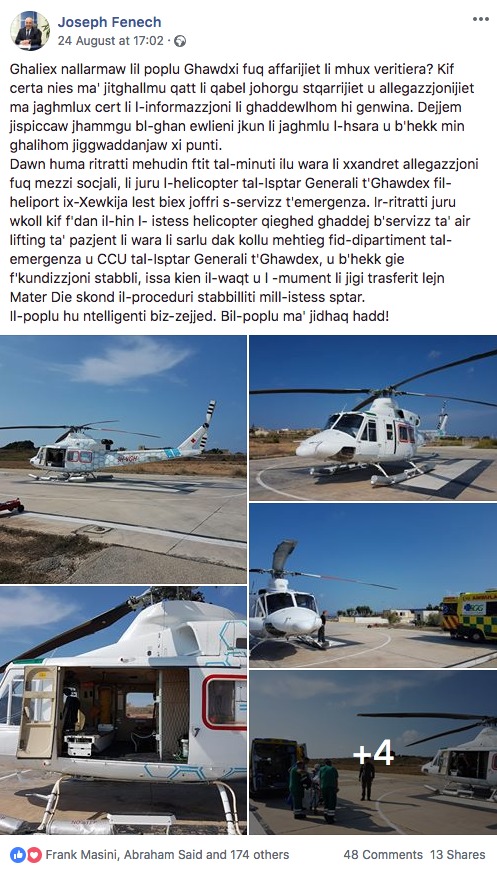 Fenech took to Facebook a day after the report was presented to the Health Minister, saying that Steward Healthcare now invested in specialised vehicles to transport patients between the two islands.

Steward Healthcare have also said that the investment in 18 new vehicles were examples of their commitment to improve the hospital’s infrastructure and making them more accessible.

Coryse Borg   June 30, 2020
One of San Andrea School teacher Tatiana Barbara's biggest disappointments so far has been having to cut this year's academic year so short.