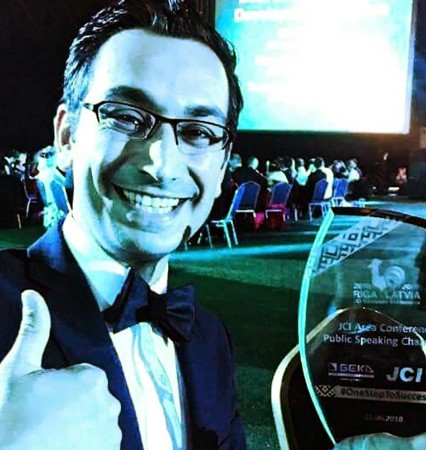 Anthony Galea will represent Europe and Malta in the 2018 JCI World Public Speaking Championships to be held in Goa, India.

31-year-old Galea is a scientist and researcher at the University of Malta. Back in March, he was chosen to represent Malta in Europe.

The speeches that led to the victory of the competition took place at the annual European Conference of Junior Chamber International in Riga, Latvia, and were focused on how people can make their contribution to save environment.

Galea managed to impress the audience and the jury using a small cannon he himself made, to show how one can create more sustainable air travel.

For the final competition, Galea spoke about how oceans all over the world are suffering from plastic invasion.

For the first time, Malta was also represented in the European JCI Debating Championship. The team was composed by Rachel Cassar, Nicole Borg and Christoph Schwaiger and placed in second place.