Throughout the past months, the Maltese government, carried out unprecedented Constitutional and Institutional reforms which were positively received by the Venice Commission within the same Council of Europe, and the European Commission, said the Maltese government in its reacation to Pieter Omtzigt’s statement on Malta in the Parliamentary Assembly of the Council of Europe.

On Tuesday, the Parliamentary Assembly of the Council of Europe stated that recommendations on ensuring justice for slain journalist Daphne Caruana Galizia and the strengthening of the rule of law have been deemed “unsatisfactory”.

The Assembly’s Legal Affairs Committee has endorsed a follow-up report by its rapporteur Dutch MP Pieter Omtzigt whose mandate has come to an end.

The committee said that the implementation of the recommendations on ensuring justice for Daphne Caruana Galizia remained “fundamentally unsatisfactory, with no final results”. 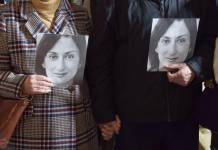 The Maltese Government said that it has remained in constant contact with Omtzigt throughout the entire period when he was Rapporteur and provided continuous updates on the situation of the rule of law in Malta. However, the resolution fails to provide a clear picture of all the work undertaken, said the Maltese Government.

In the statement, published on Wednesday, the government mentioned the various reforms following a unanimous Parliamentary vote by the Maltese House of Representatives on a diverse number of amendments to Malta’s constitution and other legislation.

The Maltese Government reiterated that, whilst this work does not represent the completion of all processes, one must recognise that the mentioned changes serve as a strong and solid foundation for other reforms that have yet to be undertaken during the Constitutional Convention chaired by the President of Malta.

Prime Minister Robert Abela and the Labour government have failed the good governance test and are causing great damage towards Malta’s reputation.

PN MPs Karol Aquilina and Jason Azzopardi said in a statement on behalf of the Nationalist Party that the decision by the Parliamentary Assembly of the Council of Europe and the Assembly’s Legal Affairs Committee confirm this through their statement on the implementation of the recommendations on ensuring justice for Daphne Caruana Galizia whic remained “fundamentally unsatisfactory, with no final results”.

The Nationalist Party said that Prime Minister Robert Abela followed the footsteps of his predecessor, Joseph Muscat, instead of strengthening the institutions.

In its statement the PN said that Abela has to stop from blaming others for the government failures and noted how until this day, Joseph Muscat, Konrad Mizzi and Keith Schembri have not faced justice. Aquilna and Azzopardi again retirated that it is an “irresponsible decision” to end the public inquiry into the murder of investigative journalist Daphne Caruana Galizia, next week.

In its reaction, the Labour Party said, that the Government has been working to enforce the institutions and that both the European Commission and the Venice Commission can recognize such efforts.

The only weak thing is the Opposition under the helm of Bernard Grech said the Labour Party in its statement on Wednesday.