A spokesperson for the European Centre for Disease Prevention and Control which provides data to the WHO has apologised for publishing inaccurate figures for Malta’s coronavirus death toll.

The government has in been in contact with the WHO after another coronavirus-related death was listed on its website.

An email seen by Newsbook.com.mt shows a spokesperson for the international agency apologizing to the Maltese health authorities after both the ECDC and the WHO upped Malta’s death toll from 14 to 15.

The mistake has been attributed to the collection of daily data for 200 countries manually.

Both the ECDC and the WHO have amended their figures down to 14.

A 19-year-old asylum seeker who died after sustaining a fall in an attempt to escape the Ħal Far detention centre, tested positive for coronavirus after his death, Newsbook.com.mt can confirm.

A government spokesperson was asked whether the youth who tragically lost his life last week had tested positive for coronavirus after his death. The spokesperson confirmed the news.

In her comments to this newsroom, the spokesperson said: “nowhere in the world are victims of other incidents who subsequently test positive for coronavirus included in the virus’ death toll since the cause of different would be different”.

Commenting on the discrepancies between the national statistics and those reported by the World Health Organisation, the spokesperson said that the WHO has probably relied on media reports for its information rather than official data released by the health authorities.

Government in communication with WHO over COVID-19 statistics discrepancies

The government confirmed that is currently communicating with the World Health Organisation, WHO, after the latter has issued information online that Malta registered 15 deaths due to COVID-19. According to the government’s official statistics Malta has registered 14 deaths and not 15.

A spokesperson to the Ministry for Health confirmed with Newsbook.com.mt that there hasn’t been a death registered due to coronavirus after the 14th victim was announced in the past days. The spokesperson also confirmed that the government is communicating with WHO to verify from where the organisation received the information that Malta had its 15th victim.

A spokesperson for WHO said that they are investigating the issue.

There have been other discrepancies between the statistics released by the Maltese government and that of WHO, for example on the 7th of September the government said that Malta registered 37 new cases and WHO said that there were 62.

This newsroom asked when does the government provide WHO with the latest information. The spokesperson for the Ministry for Health said that every week the authorities provide the World Health Organisation with the latest statistics. 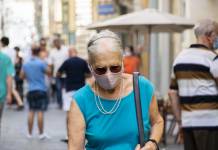