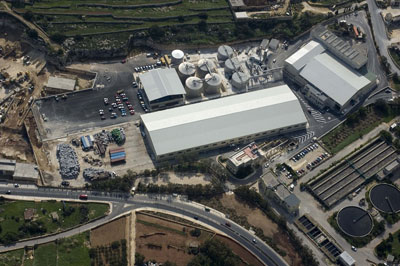 The puddles at the Sant’ Antnin plant are not sewage but in fact signs of ‘continuous cleaning,’ Wasteserv has said.

The company responsible for the waste treatment plants at Marsa and Marsascala, was responding to a public complaint by the Nationalist MP Jason Azzopardi, referring to the sub-standard operations and smell emanating from the facilities.

Wasteserv adds that while it tries to reduce the impact of smell, the incinerators are dealing with, ‘animal carcasses and hospital waste hence a degree of odour is expected as part of the operations which are more an element of nuisance rather than being harmful.’

The incinerator at Marsa, was opened in December 2007 and is, ‘designed to fully incinerate abattoir waste, clinical waste and other waste,’ at temperatures between 800oC and 1000oC.

In Azzopardi’s letter, he’d referenced complaints from local residents and businesses about the smell. He also explained that there had been reports of workers from the facility being taken to hospital because of the smell.

Wasteserv disputes this saying that only one person working at the facility in Marsa, had been taken to hospital in September. This was not linked to the odour.

Along with concerns about the puddles and smells, Wasteserv also refers to Azzopardi’s claims about 3 out of 4 digesters not operating correctly. They dispute this explaining that the 3 are working normally with the 4th, ‘being bypassed until the bacterium inside it dies, after which Wasteserv can undertake the scheduled cleaning.’

The organisation goes on to explain that there are plans to shut-down the Sant’ Antnin plant within 7 years, and invest in new recycling facilities at the Malta North Facility.

The Nationalist Party says the government failed to meet the promise of building a new waste treatment shed at the facility in Sant’ Antnin Marsascala, following a fire back in June 2017.

In their statement presented by PN’s Opposition Spokesperson for the Environment Jason Azzopardi, they list a number of problems outlined at the Sant’Antnin plant and Maghtab.

Among the list of problems were the poor maintenance of the machinery at the plant as well as damage to three of the four digesters and pools of sewage sludge.

The PN subsequently challenged the Environment Minister Jose Herrera to open up the facility to the media, in order for them to see the conditions inside.

This follows yesterday’s statements from Azzopardi received from PN residents and businesses in Marsa and Marsascala. They had complained of the smell coming from Marsa incinerator and the Sant’ Antnin plant in Marsascala.

The conditions within the Marsa incinerator are so bad that employees were taken to hospital because of the polluted air and foul smell. They leveled the problems at the Environment Minister for not investing sufficiently in the plant. Azzopardi added that the fire back in 2017 was the result of negligence and incompetence by Wasteserv.

Work side by side

Responding to the news, the Environment Ministry said that the Government is fully committed to ensuring that the country has the best infrastructure, even in waste management. The government appealed to the Opposition to instead use its time to speak on operational matters and work side by side with the government so that the country continues to carry out the necessary changes to this important area of our country and not attempt to hinder the beneficial changes being made by the Government.