Partit Nazzjonalista said that the Government should ensure that Malta’s reputation is restored in a statement on Thursday signed by Opposition spokesperson for finance Mario de Marco.

The European Central Bank withdrew the licence of Satabank plc as from Tuesday, on the advice of the Malta Financial Services Authority.

All of the bank’s 12,000 accounts had been frozen by the MFSA on October 2018 over widespread breaches of money laundering laws, and the bank was eventually slapped with a €3 million fine. That same month, the MFSA had appointed Ernst & Young to monitor and advise the bank, and EY will continue do to so until otherwise decided by the authority. 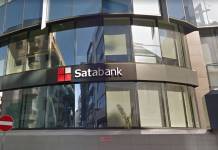 Reacting to the news, Partit Nazzjonalista said that it felt that Malta’s reputation has one again been tarnished in the interest of organised crime which had chosen Malta to carry out business.

“It would have been better if organisations carrying out such suspicious activities were kept away and barred from operating in our jurisdiction,” de Marco said, adding that this posed a risk to the country’s reputation.

The Opposition took the opportunity to reiterate its appeal to the government urging to ensure that the jurisdiction’s reputation is restored and ensure that Malta is respected within international fora. Partit Nazzjonalista said that this could only be done if the authorities concerned granted licences to reputable institutions which contribute to economic growth in an honest manner.

John Paul Cordina   August 9, 2020
A group of 8 Roman teenagers have tested positive for Covid-19 after returning home from a Malta holiday, Italian media is reporting.