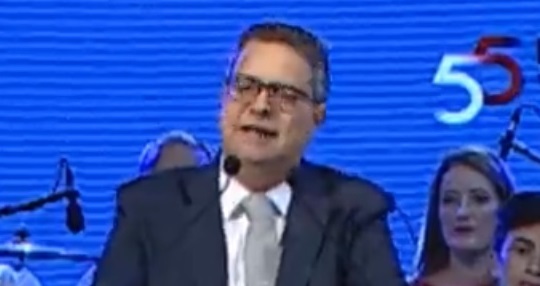 Partit Nazzjonalista leader Adrian Delia said that in the said that Malta’s first Prime Minister after Independence, Giorgio Borg Olivier, had a serious plan for making Malta autonomous and truly able to take its place in the conference of nations. Addressing party faithful at a mass meeting outside the party headquarters, this move from the traditional PN stomping ground of the Grannaries raised more than a few eyebrows.

Eddie Fenech Adami and the road to Europe

Delia then referred to the vision of another PN visionary, Eddie Fenech Adami, who, as prime minister worked to integrate Malta into the EU. Delia said that Eddie Fenech Adami was also responsible for media pluralism. “It was a bid to free speech from control, to accept all forms of criticism and a bid to entrench democracy in a society which, at that time was fighting for work, justice and freedom,” said Delia.

Referring to the next milestone after EU accession, Delia referred to the introduction of the Euro under Dr Lawrence Gonzi and the solid economic foundations which enabled Malta to weather an economic storm which rocked all the world but bypassed Malta.

Government is grabbing the institutions

“This government is undermining the institutions of the country” warned Delia. He said that the legal system, from the Attorney General to the Courts of Law, the Police and the FIAU, these institutions have been grabbed under government hegemony with dire consequences for the rule of law and democracy.

Delia criticised government’s disdain towards the environment and the devastation of trees in favour of wider roads and increased pollution. He said that in the mad race to make money, the government is not realising that even the middle class is now feeling the pinch. Delia said that this seems to bother the government not at all since it seems to be meeting its commitments to the distribution of lucrative contracts. “From the construction of a school a year under the PN, we are now reduced to a classroom-container a week” objected Delia. He referred to the brain drain in the teaching profession and said that the teachers have been badly treated not only in salary and status but also in the lack of provision for their security.

Mater Dei – State of the art

Delia referred to Mater Dei hospital, saying that the hospital had been constructed as state of the art. “Then came along Vitals, a company without a sherd of experience in the sector and the hospitals were given to them on a golden platter,” said Delia, insisting that the fight to regain control of the hospitals was far from over. After Vitals came Stewart, said Delia, and yet the millionaire investment which had been promised has still not materialised. “A monopoly of silence reigns over government,” said Delia.

A growing gap between rich and poor

Delia warned that official statistics show that the gap between the haves and the have-nots is growing. He said that the same statistics show that each year the earning and spending power of families is declining and Malta has the lowest salary growth in Europe. He said that the younger generation, even those in employment are finding it difficult to find property due to the exorbitant prices and the diminished income. The elderly have seen minor increases in income and their struggle to remain above the poverty line is a very real one, said the leader of the PN. “In this scenario,” sais Delia “a government crony was given €150,000 as a golden handshake and promptly re-employed…Not even the former PL deputy leader could stomach this”. Those hand-picked by the PM, said Delia, used public funds to do whatever they liked. “ We will do whatever it takes to bring back good governance in this country, even take to the streets if necessary” warned Delia to the crowd’s enthusiasm.

Referring to property prices, Delia said that the right to shelter was a fundamental one and promised that a PN government would ensure that this fundamental right would be given to everyone. The elderly, he said are not a burden but a wealth of the nation and their quality of life needs to be safeguarded. Democracy, justice and tolerance need to be re-instated and the fight for freedom needs to be made again said Delia.

“I ask government to declare a crisis situation where the climate is concerned,” said Delia in a direct reference to the worldwide strike which took place this week to protest the climate crisis. Delia warned that this is not a problem for some time in the future but a very real and present danger, particularly to small island nations. He said that this fight will also be taken to parliament.

Delia said that the time had come for the PN to call on all Maltese to help build a future based not on lucre but on self-worth, national identity and innovation. The environment and the economy need to work in tandem with ample space for businessmen to work without the need to grease palms. “Freedom of speech needs to be established again and Malta should not become a place where death awaits those who criticise,” said Delia. Society must be one that cares, concluded Delia.