By the end of April, the Government’s Consolidated Fund registered a deficit of €144 million for 2019.

Total expenditure by the end of April 2019 stood at €1,531.7 million which is a 15.6% increase from the corresponding period in 2018. Recurrent expenditure stood at €1,321.1 million, €163.6 million higher than the corresponding amount reported by the end of April 2018. The main contributor to this increase was a €100.6 million rise reported under Programmes and Initiatives.

Government’s capital expenditure registered an increase of €51.2 million from the same period last year and amounted to €144.4 million. The rise in outlay was due to added expenditure reported on road construction and improvements €18.8 million investment incentives €14.6 million EU Internal Security Fund – Borders and VISA €10.9 million and EU structural funds 2014-2020 €7.9 million. 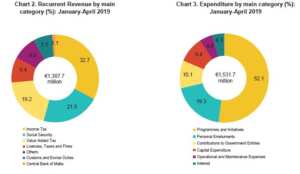 The difference between total revenue and expenditure resulted in a deficit of €144.4 million being reported in the Government’s Consolidated Fund by the end of April 2019, compared to a deficit of €95.9 million in the same period in 2018. The main catalysts in the difference were increased outlays in both recurrent and capital expenditure.