As Newsbook.com.mt had revealed on Tuesday, Italian tenor Andrea Bocelli paid a visit to Malta this week, in which he sang at various locations including the St John’s Co-Cathedral in Valletta.

The Tourism Ministry said that Bocelli’s 3-day visit, in which he was accompanied by his wife Veronica and their daughter Virginia, was part of a project coordinated by the Malta Tourism Authority which would be launched in a few weeks’ time.

Newsbook.com.mt had reported that the world-renowned tenor was filming in Malta in preparation for his Christmas concert, which will be streamed from the Teatro Regio di Parma on 12 December. It is understood that the concert will feature a number of pieces which the tenor has performed in Malta.

While this newsroom’s report was effectively confirmed by the ministry’s statement, it had been pressured to withdraw Tuesday’s article after publication. 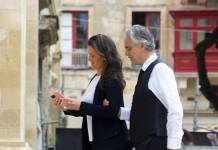