The system that operates the use of the €20 vouchers that the Government is distributing is now back in operation after a technical failure.

On Facebook, Mimcol, which is the government entity operating the voucher system, said there were a number of businesses that had problems with the web-app when scanning the vouchers.

Mimcol announced that the system has now returned to normal. It advised that businesses should exit the Mimcol Vouchers app and re-enter it to use it.

Newsbook.com.mt has contacted a spokesperson for the Ministry of Economy, who referred to Mimcol’s statement.

This morning, people and business owners resorted to social media to express their displeasure. Som businesses stated that they would not be accepting vouchers until the issue was resolved.

On July 10th, Mimcol said vouchers would be activated 24 hours after arrival. It stated that to ensure their validity, people should let this period pass before spending it in a shop. 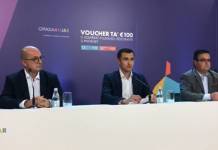 Watch: 8th August was the day when most vouchers were redeemed