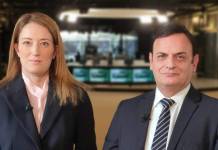 According to the Office of the Prime Minister (OPM), during a meeting with Sassoli, Robert Abela discussed the issue of illegal immigration and that Malta as an EU country will need long term solutions to deal with the crisis while during the meeting with Charles Michel the European budget and good governance were the main topics discussed.

Same current issues were discussed between Malta’s Prime Minister and the President of the European Commission, Ursula Von der Leyen. According to the OPM, it was agreed that regarding illegal immigration the burden must be shouldered between all European Union member states.