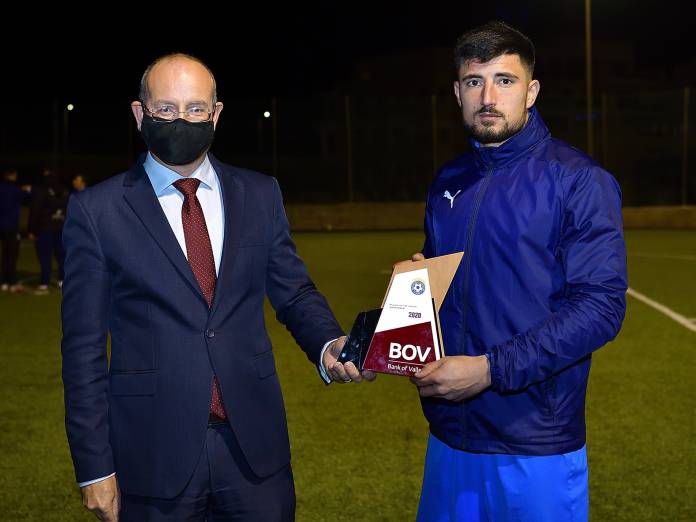 Nadur Youngsters goalkeeper Steve Sultana is the BOV GFA Player of the Month for November 2020.

Sultana’s skills between the posts were most evident during Nadur’s match against Xaghra United in the BOV GFA First Division League. Sultana thwarted Xaghra’s attacks with a string on fine saves to keep the score at 0-0 with Nadur’s goals coming in the late stages of the game. In their second game against Ghajnsielem, and with the score at 1-1, Sultana bore the brunt of Ghajnsielem’s attacks to salvage a point for the reigning champions.

Steve Sultana’s career started in the Nadur Youngsters youth nursery where he debuted for the senior team at a young age. He formed part of the U21 National Team and also formed part of the national team squad. He played for Xewkija Tigers where apart from honours at Club Level was also selected as the GFA player of the Year. Sultana played in the BOV Premier League with Balzan, Qormi u Ħamrun Spartans, before returning to Nadur at the beginning of the 2019/2020 season.

Horace Laudi, Chief Officer at Bank of Valletta presented the BOV GFA Player of the Month trophy to Sultana who chose Fondazzjoni Arka to benefit from the donation associated with this award.

Watch: From “humble beginnings” in Gozo to a football star