Labour MP Glenn Bedingfield will be the new Government whip. Bedingfield confirmed this news himself to Newsbook.com.mt.

Bedingfield will be joining the new Cabinet, the members of which were officially announced and sworn in yesterday. The Ministers and Parliamentary Secretaries were handpicked by Prime Minister Robert Abela himself from the pool of elected MPs.

Under Joseph Muscat’s Legislature, the role of whip was occupied by Fgura’s ex-Mayor Byron Camilleri. Yesterday, Camilleri was sworn in as the new Minister for Internal Affairs and National Security. 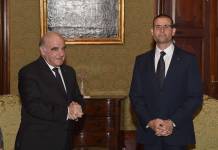