Germany’s government faced calls to toughen gun ownership laws and step up efforts to track far-right sympathisers, after the suspect in one of its worst mass shootings since World War Two was found to have published a racist manifesto.

The 43-year-old presumed killer of nine people in two shisha bars in the southwestern town of Hanau had posted the document, espousing conspiracy theories and deeply racist views, online.

The suspect, who is believed to have killed himself and his mother, belonged to a gun club, raising questions as to how a man with such ideological convictions managed to gain membership, and obtain the weapons used in the attack.

Gunman suspected of killing nine in Germany had far-right views 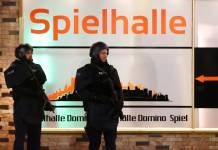 Germany’s prosecutor general said on Friday that the suspect had a licence for two weapons, and it remained unclear whether he had contacts with other far-right sympathisers at home or abroad.

In October, Chancellor Angela Merkel’s government outlawed the sale of guns to members of extremist groups monitored by security agencies and obliged online platforms to inform police about hate content.

Those measures followed the killing of a pro-immigration German politician in June and an attack four months later on a synagogue and a kebab shop in Halle by an anti-Semitic gunman who live-streamed his actions.

At least five of the Hanau victims were Turkish nationals, Ankara’s ambassador to Berlin said on Thursday as his government demanded a robust response, calls echoed by representatives of Germany’s large Kurdish community.

Driven in part by a rise in immigration, popular support for far-right groups are growing in Germany in conjunction with a shift away from the political mainstream.