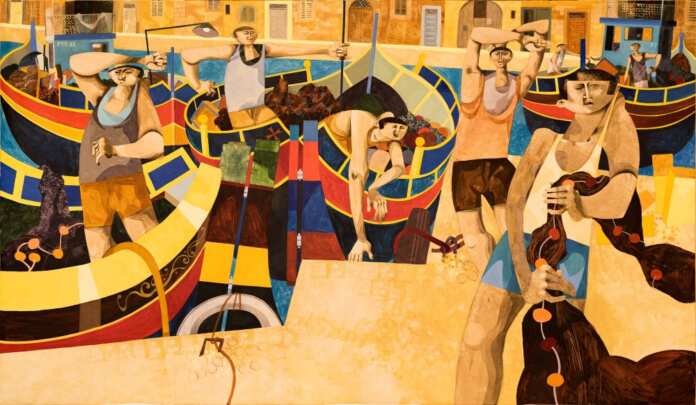 The extensive collection of the Malta Maritime Museum in Birgu has been enhanced even further with the donation of a painting by renowned British artist George Large.

In 1984, Large set up his first solo exhibition in Malta at the National Museum of Archaeology. Now that he is retiring with his wife in England, Large has donated one of his iconic artworks to Heritage Malta since he wished that part of him would remain on the island which he has come to love.

George Large is known for his incredible eye for composition. Although influenced by the work of Edward Burra and Stanley Spencer, along the years he has created a style of his own which is nowadays sharply distinguished. He blends his particular interest in shapes and working people with location, activity and colour, presenting intricate and restless works of art.

Large’s most known artistic characteristic is the exaggeration in bodily form. His figures, consisting mainly of men, are typically disproportionate, with big heads, over-sized hands, and rough and uncouth bodies. The active figures animate the locations which he depicts vividly.

Having spent the winters of the last thirty years in a house of character in the village of Ħal Safi, Large became fond of the Maltese Islands and its people. This is evident in his extensive works which showcase Maltese locations and local people at work.

Large’s preferred medium is watercolours. Yet sometimes he paints in oils, usually on a large scale. Although he was very prolific with watercolour works which depict Malta, the few oils relating to the island can be counted on one hand. 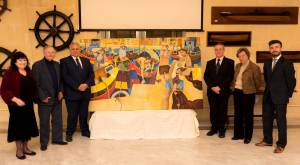 The large painting of Fishermen at Marsaxlokk which the artist has donated to Heritage Malta is one of these exceptions. Its theme is in honour of the hard-working fishermen and their beautiful characteristic Maltese boats.

Emmanuel Magro Conti, who in these last years served as a Senior Curator at the Malta Maritime Museum, and Liam Gauci, Curator of the same museum, thanked George Large and showed their appreciation to Mrs Alaine Apap Bologna for spearheading this donation. They also pointed out that Large’s iconic artwork will play a significant role in this museum since it will bridge the connection between local ethnographic crafts and boats, the national identity, historical significance and the contemporary art scene.

Dr Anton Refalo, Chairman of Heritage Malta, expressed his gratitude for this gift to the museum which documented our local maritime heritage. He regarded this painting of hard-working fishermen in Marsaxlokk as a representation of our crafts, our way of thinking, our hopes and our aspirations which unite the Maltese people as a nation.