Almost two years since the collapse of the bridge in Genoa, Italy, a new bridge is now in place and inaugurated on Monday however it will not open to traffic until Tuesday of Wednesday.

When the Morandi bridge collapsed on the 14th of August 2018, 43 people were killed.

Engineers working around the clock to complete Genoa bridge by summer 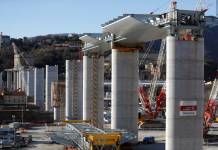 The bridge replacement was designed by Italian architect Renzo Piano and was inaugurated by Italian Prime Minister Giuseppe Conte.

Families of the victims have refused to be part of the inauguration. Instead, they will be meeting on the 14th of August to mark the tragedy’s 2nd anniversary.

Engineers working around the clock to complete Genoa bridge by summer