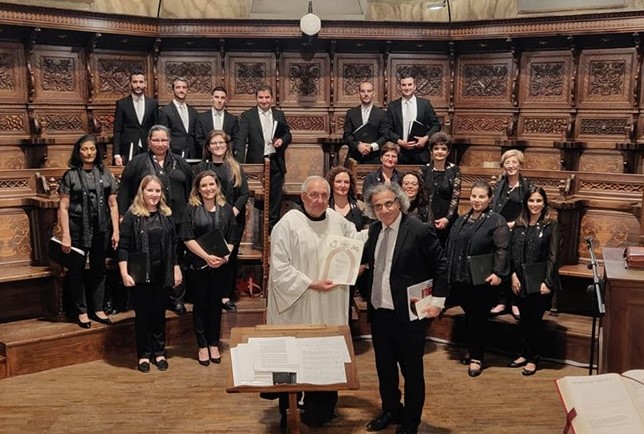 Gozo’s Gaulitanus Choir recently returned from Italy where it was on its 17th venture abroad – this time in Assisi and Rome. This followed invitations from Assisi’s Cappella Musicale Basilica Papale di San Francesco and Rome’s Festival di Pasqua respectively.

The choir’s first artistic commitment was in Assisi; the animation of the Pentecost Vigil Mass at the enchanting and spiritually uplifting Basilica Inferiore di San Francesco. As soon as the group arrived at San Francesco, it was offered a tour of the whole splendid Franciscan complex by Padre Daniel, before eventually being welcomed at the Basilica Inferiore by Padre Giuseppe Magrino, the musical director of the Cappella Musicale, who was also responsible for the choice of the repertoire for the mass. At the end of the mass, which was attended by hundreds of pilgrims, a very pleased Padre Magrino offered the Gaulitanus Choir a certificate confirming its participation at this Franciscan church. Choir director Colin Attard reciprocated by offering a memento.

The choir then moved to Rome for its other artistic commitments, which were held at the Basilica dei Santi XII Apostoli in the very heart of Rome. Indeed, the choir first animated the Pentecost Sunday mass and then gave a concert, the Concerto per la Domenica di Pentecoste, which concluded the twenty-second edition of the Festival di Pasqua. The concert was held in aid of Emergenza Sorrisi, the NGO founded some twelve years back by top plastic and maxillo-facial surgeon Dott Fabio Massimo Abenavoli in order to assist afflicted children in the third world. Dott Abenovoli, currently the president of Emergenza Sorrisi, attended the concert accompanied by his wife. Another guest of honour was Prof Franco Ceriati, the famous surgeon, lecturer and president of AIPRO (Associazione Italiana Prevenzione e Ricerca Oncologica). These, as well as the organisers, were full of plaudits for the Gozitan choir’s performance.

While the Città di Pace was added to the impressive list of Italian cities and towns in which the Gaulitanus Choir has performed in the past, this was the choir’s second appearance in the Città Eterna and particularly in the Festival di Pasqua, following its successful participation in 2017.

Both Roman ventures ensued from the choir’s collaboration with the founder and artistic director of the Roman festival, Enrico Castiglione, which has been ongoing for a few years culminating in the operatic production put on by the Gozitan choir during its own Gaulitana: A Festival of Music.

For these artistic commitments in Italy, the choir’s varied repertoire ranged from Renaissance polyphony of the Roman school to contemporary works, bridged over by compositions from the classical and romantic eras. Indeed, the eclectic mix includes works by Arcadelt, de Viadana, Beethoven, Schubert, Mendelsohn-Bartholdy, Gounod, Stainer, Zardini, Ortolani, Frisina, u Miserachs. Of course, the Maltese touch (including the use of the Maltese language) was also very significantly present through some of Colin Attard’s compositions and arrangements. A fuori programma, which also underlined the choir’s versatility, was a ‘cute’ arrangement of a Negro Spiritual by Malcolm Sargent.

During this concert tour, which was also endorsed by Arts Council Malta as part of the Gaulitanus Choir’s broader programme of international events for the year, the choir also had the opportunity to visit Perugia as well as to enjoy a culturally-enriching sightseeing programme in both Assisi and Rome. Some choir members also had the opportunity to meet Frate Alessandro Brustenghi, the famous tenor-friar who some years back had given a concert in Malta conducted by Mro Attard also featuring the Gaulitanus Choir.

Rock band Genesis to reunite for first tour in 13 years