The gathering of evidence against murder suspect Yorgen Fenech continued on Wednesday morning.

On Tuesday, the defence team filed a court application erroneously requesting to summon their witnesses in the next sitting, however, since the records of the case were already with the presiding magistrate, the application is deemed to be late.

The prosecution will be summoning its witnesses on Wednesday.

13:37 Thank you for following this live blog.
Monique Agius
13:37 The case will continue on Tuesday at 11am.
Monique Agius
13:36 A visibly disappointed Magistrate informs the parties that today's sitting and that on 17 December were scheduled to have more witnesses summoned.

Dr Azzopardi is seated holding his head between his hands.

Dr Mercieca asks why the parte civile should be copied in. The Magistrate snaps: "That's what the court ordered."
Monique Agius
13:11 Magistrate Montebello asks Dr Mercieca whether he is implying that the Court is breaching their client's fundamental rights. She stops him from dictating the application, as Mercieca is insisting on making oral arguments.
Monique Agius
13:08 Dr Mercieca tells the court that the defence will not be asking for proceedings to be halted until that matter is decided.

Magistrate Montebello instructs the defence to make their request through a written note.
Monique Agius
13:05 Dr Mercieca asks the court permission to refer the issue to the First Hall of the Civil Court in its Constitutional Jurisdiction and then suspend these proceedings until the First Hall Civil Court decides on the fair hearing and equality of arms complaint.
Monique Agius
13:04 The decision goes the attorney general's way with the court saying it could not censure a maneuvre by the Attorney General aimed at speeding up the case and denies the request put forward by the defence.
Monique Agius
13:00 The court reads out its decree.

It says that it cannot base its decree on the time when the acts were presented, over and above the fact that this is not indicated. The court adds that it does not agree that it should see who presented its request first to determine who should testify first.

The court received the records on 3 November the Magistrate said, adding that it is not for the court to investigate who filed the request and when. Further, it does not appear that the AG "knew" of the accused's requests when he sent the records to the court.
Monique Agius
12:52 Dr Mercieca stands up to add some remarks. The prosecution is whispering.

The magistrate adds: "I hope the Court heard wrongly".
Monique Agius
12:51 Dr Marion Camilleri remarks that the AG's renvoi was for the sitting scheduled for 2 December.

At 12.40pm there was a decree informing that the judge recused himself. At 1pm it was assigned to another judge.

"According to this, despite the numerous allegations of bad faith, I had 20 minutes to write a renvoi which arrived at the One Stop Shop and was delivered before Magistrate Montebello. This shows that my submissions make sense," Dr Galea Farrugia says.

He maintains that Mercieca should retract the accusation leveled against the AG on the tampering of evidence, warning that otherwise measures will be taken against the lawyer.
Monique Agius
11:28 Dr Galea Farrugia says that the AG presented its renvoi on 4 November. The acts of the compilation arrive after 3pm. He underlines that the AG was not aware of judge Scerri Herrera's recusal before.
Monique Agius
11:27 "The court is not a springboard for the media," Magistrate Montebello warns.
Monique Agius
11:26 Dr Galea Farrugia accuses the defence of putting up a media stunt.

The accused filed an application under Article 405(5) to summon his witnesses.
Monique Agius
11:18 Dr Mercieca maintains that until the moment that Madam Justice Consuelo Scerri Herrera abstained from the case, the renvoi was brought to the attention of the Criminal Court. The Court declared this the following day. Mercieca claims that the AG did the renvoi later, adding that the AG did not state the time in which the renvoi was done.
Monique Agius
11:17 Renvoi or 'rinviju' is the sending of proceedings to another court or institution.
Monique Agius
11:16 The prosecution objects with the Court telling them that this not the way to address the court.

During the last sitting, it transpired that a team of three medical experts was appointed by the court to assess whether state witness Melvin Theuma is fit to continue testifying before the court. 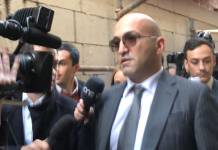 At the end of the sitting, Dr Mercieca who is appearing for Fenech asked about Theuma’s health to which Magistrate Rachel Montebello replied that medical experts who have been asked to assess his health turned down the brief leading to the appointment of a team of three by the court.

Magistrate Rachel Montebello is presiding over the case.

Lawyers Jason Azzopardi and Therese Comodini Cachia are appearing for the family.