The Electoral Commission has released the official results of the votes garnered by the Partit Laburista and the Partit Nazzjonalista and the gap between them is lower than had been foreseen.

Yesterday, unofficial results showed that PL had received over 50,000 votes more than the PN; however, according to the Election Commission statistics, the gap is actually that of 42,656 votes. 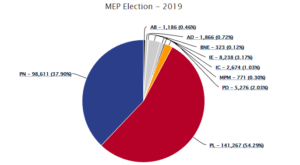 Meanwhile, in a statement in response to the difference in official figures, the PN said that the result this year is one which is close to that of the last general election. The PN said that it welcomes the election result with humility and determination. The party pledged to strive to understand and represent the desires of the Maltese people.

More information from the Electoral Commission

What are the totals of the votes cast?

How many votes did each prospective MEP receive?

Monique Agius   September 15, 2020
Navalny posted a picture on Instagram for the first time since he was poisoned. He announced that he was no longer breathing through the assistance of a ventilator.