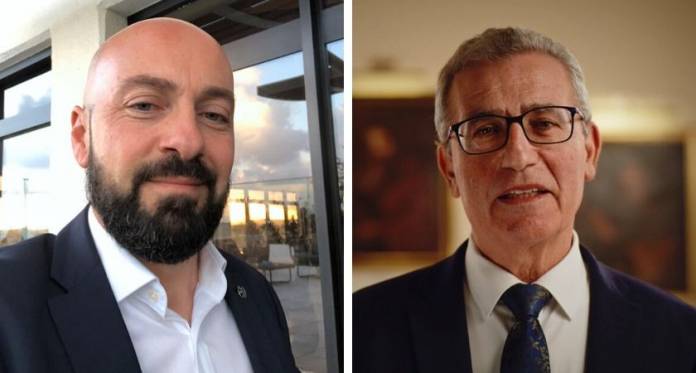 Writing on Facebook Bartolo thanked the Libyan government for stopping 2,000 asylum seekers from leaving the war torn country to Malta. However, Gafà who worked at OPM during the tenure of Prime Minister Joseph Muscat and who is known for his ties to Libya called out Bartolo without mentioning his name.

“Thanks to the work we did as a government with Serraj’s government, a new page of cooperation was opened, and is already bearing fruit – even though only small steps have been made so far and there is more to be done”, Bartolo posted on Facebook early Thursday morning.

Serraj’s government has taken steps to curb human trafficking, Bartolo remarked. He added that more work is needed to ensure that Libya can control its external borders and stop people’s smuggling to Europe.

Without mentioning names, Gafà pointed out that someone boasted over that it was thanks to a three hour visit in Libya that the Libyan government was persuaded to stop 2,000 from coming over to Malta.

Gafà accused Bartolo who is known for his early morning posts of lying. He pointed out that apart from Malta, migrants fled to Lampedusa and Sicily, where the majority choose to go to.

“I would like to remind him that, aside from Malta, there is also Lampedusa and Sicily and that the majority of migrants disembark there. I would suggest that he stops speaking about it as though they had a booking to come to Malta!”, he continued.

Gafà reminded that the visit to Libya was only three hours long. He remarked that it was a bit of a stretch to think that anything can be solved with the Libyans in three hours. Gafà added that the Libyan Coast Guard had been carrying out search and rescue operations before Bartolo started speaking out about migration.

The former OPM employee suggested that one should visit the Libyan detention centres before commenting about them, or otherwise opt to say nothing at all. After Bartolo wrote that the Maltese government would continue working with the Libyan authorities for more “decent” detention centres where asylum seekers would be able to apply for asylum.

Gafà’s ties to Libya are well known. Prime Minister Robert Abela had asked Gafà to use his contacts to push back migrants earlier this year. Earlier this year Gafà had said that he had brokered a secret deal with the Libyan government during his visits to Libya.

In a statement the government said that Foreign Affairs Minister Evarist Bartolo and his Algerian counterpart Sabri Boukadoum held a telephone call during which they discussed the strengthening of political and commercial relations between the two countries as well as the situation in Libya.

On Libya, the ministers agreed on the need for a cease-fire and Libyans to be allowed, without foreign interference, to work towards a united Libya for Libyans and to build a future of social and economic progress for Libyans.

Amy Borg   August 4, 2020
MAM has also published European centre for disease control data which the association explained it does not include migrant data.

Coryse Borg   August 3, 2020
Parts of the third installment of the mega-popular Jurassic World franchise will be filmed in Malta, mainly in Valletta, next month.

Alfred Sant questions if MAM’s decisions were intended to humiliate the...