Three funeral workers who took selfies next to the open coffin of Argentine football icon Diego Maradona have been sacked from their jobs. They have since begged for forgiveness.

The images, which were shared widely online, sparked international outrage, including death threats.

On Friday, Claudio Fernandez said that he had lost his job at the Sepelios Pinier funeral home, along with his son Ismael and a third man. “They know me. I’m from the neighbourhood,” he said. “They say they are going to kill us, break our heads.” 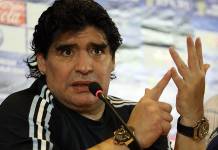 In one photo, one of the men can be seen giving a thumbs-up to the camera with one hand, while the other appears to be touching his forehead.

The football star died from respiratory problems following a heart attack on Wednesday.

On Sunday, police in Argentina have searched the house and private clinic of Leopoldo Luque, Maradona’s doctor.

It is believed that they are trying to establish if there was negligence in the treatment of the footballer during his care.

BBC News has reported that Maradona’s daughters have demanded to know what medication their father was on before his death.