This week, over €384,000 were deposited into Qala’s Local Council bank account, which will be used to repair a road in the locality which has been suffering from floods for years.

On Facebook, Qala Mayor Paul Buttigieg thanked Gozo Minister Justyne Caruana who approved this “record amount given to the Council”. He also said that this amount added to the €100,000 given a few months ago will be sufficient to repair the flooding situation in Conception Street and 28th April 1688 Street by installing water culvert and new tarmac.

According to Buttigieg, Conception Street was destroyed over 50 years ago.

Newsbook.com.mt has been reporting on the flooding situation in Qala since 2015. At that time, Deputy Qala mayor Paul Buttigieg had said that the permit to update the drainage system was approved and the only application left for approval was for water culverts. 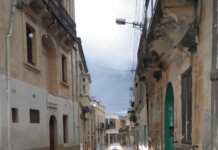