A team of French firefighters has been sent to Dover with 10,000 coronavirus tests for lorry drivers in a bid to let hauliers cross cross the Channel by Christmas Day.

France ambassador to the United Kingdom, Catherine Colonna, said the two countries were “neighbours, partners, allies and (yes) friends” in a tweet. She explained that 26 firefighters from France are working together with the British teams in Dover since Thursday morning.

A picture posted on Twitter by Colonna – using the hashtags #StrongerTogether and #thursdayvibes – showed the orange-jacketed firemen carrying out rapid tests on hauliers before dawn on Thursday.

This comes after the British transport secretary, Grant Shapps, promised that ferries would sail on Christmas Day and Boxing Day to help unblock the situation caused by a 48-hour border closure imposed by France in an attempt to stop the new hyper-infective coronavirus variant from crossing the Channel.

Anger and frustration leads to tension and scuffles at Dover 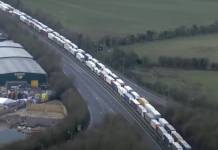 Air Malta flights to UK will continue with restrictions