Pope Francis told the World Council of Churches (WCC) in Geneva on Thursday that past attempts to overcome divisions between Christian Churches have failed “because they have been inspired by a worldly logic”. That logic, he implied, is something that the devil has used to reinforce division.

Following the teachings of the Holy Spirit, he said “means that we should choose the road of the Gospel, and refuse the shortcuts of the world”. 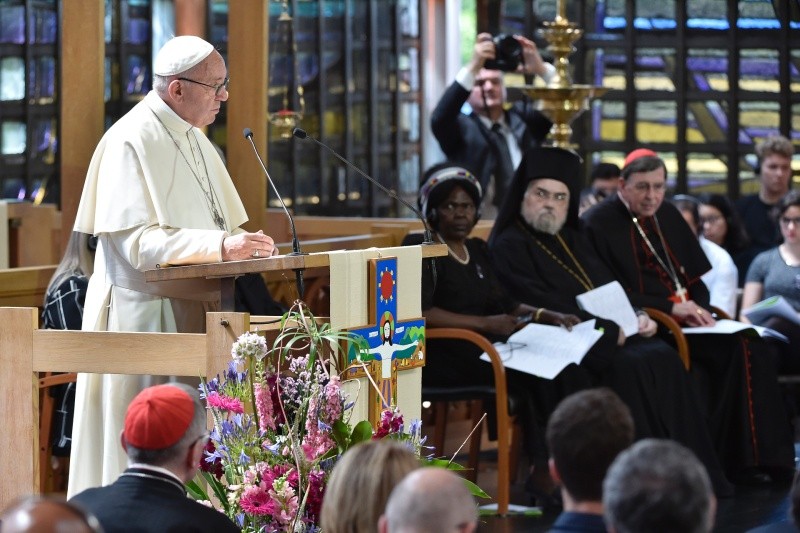 ope was addressing delegates at the 70th anniversary conference of the WCC on the theme “Ecumenical Pilgrimage: Walking, Praying and Working Together”.  “Walking together for us Christians,” he told delegates in the chapel of the WCC headquarters, “is not a strategy to expand or to increase our power, but it is an act of obedience towards our Lord and of love towards the world”.

He explained how Christians should attempt to shape history.

“Walking according to the teachings of the Holy Spirit means rejecting a worldly way of life. It means choosing and progressing in forgiveness. It means to shape history with the steps of God; not with the redundant steps of prevarication, but with the cadenced steps of a single precept: you shall love the neighbour as you love yourself,” he declared.

He added implicitly that divisions among Christians indicated that they had allowed themselves to be manipulated by the devil. “In these situations, the enemy of God and of men, has easily divided our wills, because we have not followed the teachings of the Holy Spirit,” he said. Instead, he added, people have followed worldly logic. “Past attempts to end these divisions have miserably failed, because they have been inspired by a worldly logic. Following the teachings of the Holy Spirit means that we should choose the road of the Gospel, and refuse the shortcuts of the world.”

He then urged Christians to escape from the categories of “left” or “right”, “conservative” or “progressive”: We should choose to belong to Jesus Christ, before being either left-wing or right-wing.

Francis is the third Pope to visit the WCC headquarters and is following in the footsteps of Paul VI who did the same in 1969 and John Paul II who visited in 1984.