France said the number of deaths from the coronavirus rose above 25,000 on Monday, becoming the fifth country to pass that threshold after the United States, Italy, Britain and Spain.

The daily number of new fatalities also sped up again after several days of decline.

The number of people who have died from the COVID-19 respiratory disease caused by the coronavirus increased by 306, or 1.2%, to 25,201 – the sharpest rate of increase in four days, government data showed. On Sunday, only 135 new deaths were reported – the lowest figure in more than a month.

Total confirmed cases rose by 576 to 131,863, well below the 3,000 President Emmanuel Macron’s government has set as the upper limit before it would reverse a decision to partially lift a national lockdown on May 11.

Last week, Prime Minister Edouard Philippe said the lockdown had saved tens of thousands of lives but that now was the time to relax it. Schools will progressively reopen and businesses will be free to resume operations, though restaurants, cafes and beaches will remain closed until at least June.

Health Ministry figures show the number of people in intensive care with COVID-19 infections had fallen for the 26th consecutive day, to 3,696 – the lowest since March 26.

The number of people in hospital with coronavirus also fell again to 25,548 from 258,815, continuing an uninterrupted decrease lasting almost three weeks.

More than 3.52 million people have been reported to be infected by the novel coronavirus globally and 246,910 have died, according to a Reuters tally.

Masked and gloved, Italy joins nations creeping out of lockdown 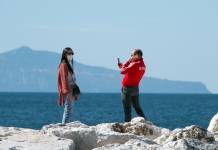