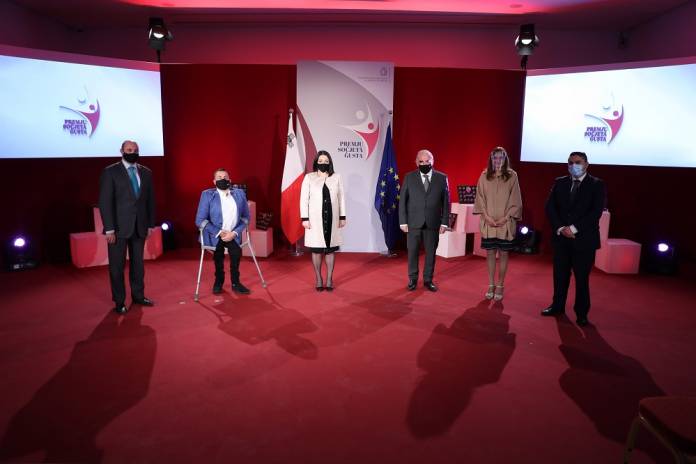 Dar tal-Providenza director Fr Martin Micallef has been honoured for his work in the disability sector with a lifelong achievement during Premju Soċjetà Ġusta.

Five individuals and companies have been recognised for their work with differently abled individuals and their work on inclusion in 2020 during a ceremony held under the auspices of President George Vella and organized by the Inclusion Ministry.

Fr Martin Micallef has been awarded a lifelong achievement acknowledging his work in the sector which is deemed to have left a positive impact on the sector.

Premju Soċjetà Ġusta is a celebration, which is now organised by the Inclusion Ministry, of the great deal of work, commitment and dedication being taken by the people involved in the disability sector. This has become an annual event and it is being held as part of the celebrations that take place during the week dedicated to disability, in December of each year. The annual event has been held since 2013.

Angela Agius who is a deaf person herself, was awarded the award dedicated to differently abled individuals who have qualities which they put into practice in order to make a positive impact in the sector.

Marchita Magiafico was awarded advocacy and tights award while Jake Vella was given the award for active participation in sports, arts and culture.

Joseph Stafrace who is the founder of Service Dogs Malta Foundation and who has served as the chairman of the Malta Guide Dogs Foundation, was awarded the Perseverance Award.

eCabs was given the award for the most inclusive company.

Inclusion Minister Julia Farrugia Portelli said that the rights of a person with disability should serve as tools for the person to achieve a quality of life like that of any other person. Rights which do not aim for inclusion are not useful, the minister said, as she committed to continue working in the sector in order to achieve full inclusion within our society.

President George Vella underlined the importance of equity in our society without any distinction being made based on a person’s ability.

President Vella appealed to the authorities to create the necessary space for differently abled individuals to reach their professional and civic potential.

He also thanked the employees in the sector and those working with Aġenzija Sapport who together with the Commission for the Rights of Persons with Disability (CRPD) continue to ensure that differently abled individuals are treated equally and are actively participating in the decision-making process.