A 54-year old man from Zabbar was given a 4 year prison sentence after having been found guilty of setting a car on fire. His children aged 17 and 18 years, were given a two-year suspended sentence. The man was also ordered to pay €4,000 in damages and the magistrate issued a three-year protection order for the victims.

What is the link between colourful language and a burnt car? 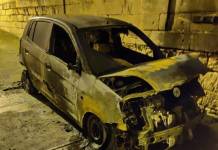 The incident happened on Monday at Triq id-Dejqa, Zabbar, with the whole incident caught on video.

What is the link between colourful language and a burnt car?