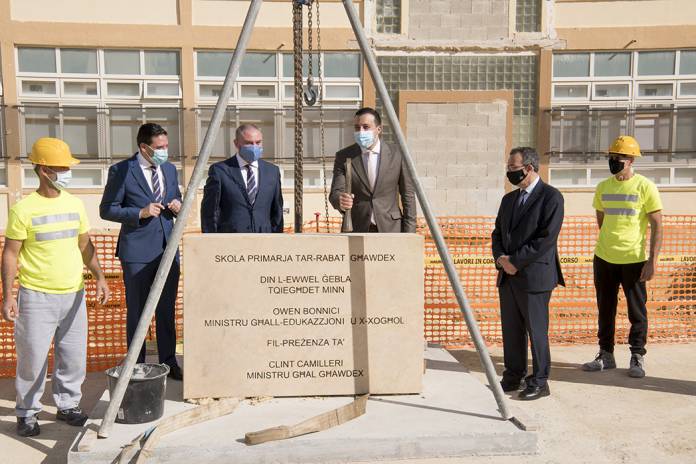 The foundation for a new primary school in Victoria was laid on Monday in the presence of Education Minister Owen Bonnici and Gozo Minister Clint Camilleri.

The new school will have 16 classrooms for primary education and ten classrooms for kindergarten. Classrooms for specific subjects such as science, information technology and the arts will also be built. The school will be spread on 8,000 square metres, of which 3,000 will be for sports and recreational use.

“Today we are witnessing the laying of the first stone of the new primary school that will be built for our children in this ever-growing locality,” Education Minister Owen Bonnici remarked, adding that the government had listened to the educators and felt the need to build a new school here. The minister noted that around €10 million will be invested in the educational infrastructure of the country.

Bonnici remarked that the school will be equipped with the best facilities including technology and sports. The local community will also benefit from this project since a childcare centre will also be built, he added.

The existing primary school in Victoria is about 160 years old, the government said in a statement.

Gozo Minister Clint Camilleri noted that this was a different infrastructural projects and was aimed at addressing the needs of students and children. He noted that works also commenced on the Gozo Aquatic Centre.

The school will have a capacity for 650 students.