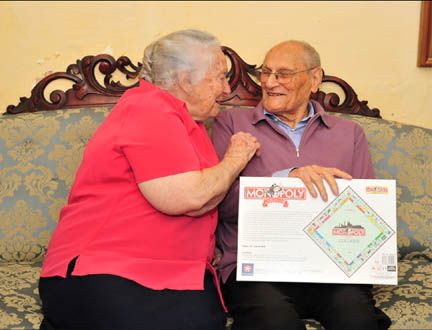 Censu Tabone and Maria Wirth were married in 1941. A strong character, Maria raised a large family and supported her husband in his professional and political career which saw him soar to the highest post in the land.

The Nationalist Party in a statement said that the loss of Maria Tabone is a loss for the whole country.

The President of Malta Marie Louise Coleiro Preca also reacted to the news, whilst she expressed her sorrow, she also commented on Tabone’s role during her husband’s political career. Coleiro Preca also said that Tabone was an example to the Maltese.

Maria Tabone was a strong woman, whose reach, like her husband’s, trancended petty politics. Like the late President Emeritus Vincent Tabone, she was open to everyone. An inspiration -JM pic.twitter.com/IkK5tokLZy

Reuters   May 24, 2020
Only a few dozen people went to the square, which was reopened on Monday along with St Peter's Basilica following coronavirus lockdowns. They kept to social distancing rules and most wore masks.

The Unity Card: a simple way for authorities to relaunch the economy

Staff Reporter   May 25, 2020
As political leaders across the old continent are contemplating how to best support those most in need and prepare the restart of our economies, European Fintechs Loyaltek and Paynovate launch the Unity Card (unitycard.eu): a prepaid card that can be used for emergency humanitarian aid or to specifically support certain segments of the population, such as local retailers and merchants who’ve had to close their businesses, with a view to relaunching the economy.

Jesmond Saliba   May 25, 2020
One person was imprisoned, 4 being investigated on possession and trafficking of drugs

38 thefts from state schools in 7 years