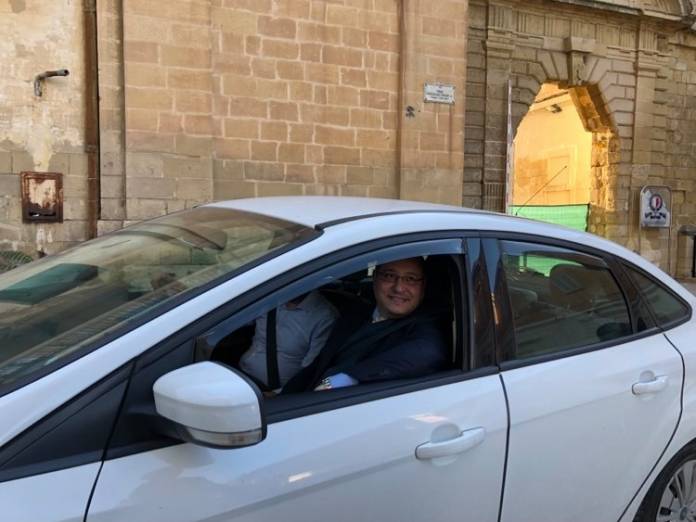 The inquiry is to determine whether the state and authorities could have done more to save Daphne Caruana Galizia’s life.

13:08 The next court sitting will be held on Friday at 9:30 am.
Amy Borg
12:08 Thank you for following this blog.
Amy Borg
12:07 Today's court session ends here.
Amy Borg
11:23 Abdilla's testimony will continue behind closed doors.
Amy Borg
11:21 Azzopardi is once again asking the witness on the information published by the assassinated journalist on the cigarettes smuggling and why the police again did not investigate when Daphne had published names and even photos on this case.
Amy Borg
11:20 He confirms again that Daphne's blog was an open source for the ECU.
Amy Borg
11:20 Ian Abdilla was evasive in his reply.

The inquiry board asked if he was aware that Dr Peter Grech told the Police (ECU) to go slow on the investigations because it will cause trouble to the country.
Amy Borg
11:19 Was it on the basis of the advice given to the ECU by the Attorney General that you did not investigate? asked the board.
Amy Borg
11:18 The board is noticing that Abdilla is trying to justify why the ECU did not investigate Panama Papers.
Amy Borg
11:16 Before the media was asked to exit the courtroom, Abdilla said that the police was investigating other huge cases not only the Panama papers.

The board said that this does not justify why the Police did not investigate Panama papers where politically exposed persons were mentioned.
Amy Borg
11:14 Abdilla's testimony will continue behind closed doors.
Amy Borg
11:13 Auditor General, Charles Deguara, expressed his doubts on the regularity of the tender issued by Projects Malta to transfer the Institute of Tourism Studies building to the DB Group. The tender was issued five years ago.

In the report by the National Audit Office which said that Projects Malta failed to obtain the authorisation from the contracts department before the offer was issued in November 2015, to build, design and operate the project which is to be built on the site occupied by ITS in Pembroke.

The report said that “no information supporting this decision or who was involved was provided, with the Office of the Prime Minister and the Ministry of Tourism each assigning responsibility to the other.”
Amy Borg
11:12 Asked if the ECU had investigated the report by the NAO Office on the ITS land transfer to the db Group, Abdilla said that the NAO office did not refer this report to the ECU to investigate.
Amy Borg
11:09 Lawyer Azzopardi is asking on information revealed by Daphne Caruana Galizia on the owner of the db group and allegations of cigarette smuggling, Abdilla replied he is not aware of it.
Amy Borg
11:07 Regarding his feelings towards Silvio Valletta knowing certain things on Fenech which Abdilla did not, Abdilla said that he wished to explain this behind closed doors.

He also said "Kont maħruq" it is being understood Abdilla is referring to Valletta.
Amy Borg
11:05 Ex-deputy Police Commissioner Silvio Valletta had called Abdilla to not go to Fenech's office because he was not there as he is unwell.
Amy Borg
11:05 He excluded that he ever communicated with Yorgen Fenech.
Amy Borg
11:01 Lawyer Comodini Cachia is asking questions regarding the decision taken by the police to visit Fenech at his office at Portomaso.
Amy Borg
11:00 The ECU became actively involved in the murder investigation in August 2019 when they started to investigate Melvin Theuma, confirmed Abdilla.
Amy Borg
10:59 Abdilla said he is not involved in the murder investigation of Daphne Caruana Galizia but confirmed he attended meetings on updates on the investigations.
Amy Borg
10:57 When was the first time you knew there was a connection between Yorgen Fenech and 17 Black? asked lawyer Therese Comodini Cachia.

Abdilla said he never heard about this book until now.
Amy Borg
10:52 The inquiry board has once again asked Abdilla about the Panana Papers.
Amy Borg
10:48 The Egrant inquiry has also investigated all forms of transactions but at the time Azerbaijan had a non-functional FIAU so no co-operation was provided by the Azeri.

Lawyer Azzopardi was asking on the connections between Michelle Muscat and Leyla Aliyeva.
Amy Borg
10:46 One of the directors is also a managing partner of another financial institution. How is this possible? asked lawyer Azzopardi.

Abdilla said that an investigation is still ongoing and that they do not exclude Sadr's extradition.
Amy Borg
10:38 Asked why on the Montenegro Scandal he had asked his subordinates to put aside the investigations, Abdilla looking confused replied that he does not remember saying this.
Amy Borg
10:35 "We were using the Panama Papers as a means to investigate other cases," said Abdilla.

"So you are saying that what was revealed on money laundering in the Panama Papers was not investigated, was ignored and that instead the Police was investigating other matters through this international scandal" – said Madame Justice Lofaro.
Amy Borg
10:34 On Panama Papers the ECU did not investigate said Abdilla.

The inquiry board said "How is this possible. It is unacceptable."
Amy Borg
10:33 "This hurts us," said Abdilla because we cannot just go to Dubai because there are legal procedures which we have to abide by.
Amy Borg
10:31 Lawyer Azzopardi is saying how is it possible that the police has not yet been to Dubai to investigate Yorgen Fenech and 17 Black.
Amy Borg
10:29 Abdilla said that institutions in Dubai are not co-operating in the investigations.
Amy Borg
10:24 The first time Abdilla heard of Cifidex was from an FIAU report on 17 Black. This was in March of 2018.

Cifidex is a company mentioned in the Montenegro scandal.

Investigations on Cifidex started to intensify when Yorgen Fenech was arrested last year, in November 2019.
Amy Borg
10:24 The board is surprised by this reply.
Amy Borg
10:23 Azzopardi is asking why the police, after 2 years is still investigating perjury by Karl Cini.

Abdilla said that the investigations are soon to be concluded and that there might be a possibility that there is no case of perjury.
Amy Borg
10:22 Lawyer Jason Azzopardi is now asking the questions.
Amy Borg
10:21 "How can you not investigate a politically exposed person on allegations revealed on an international level? You have no answer," said Madame Justice Lofaro.
Amy Borg
10:20 Abdilla said that he did not feel he had to question Keith Schembri on what was revealed in Panama Papers.
Amy Borg
10:19 Madame Justice Abigail Lofaro has repeatedly warned Abdilla to answer the questions.

Lofaro also said that the police cannot not investigate until an inquiry is ordered.
Amy Borg
10:15 The former ECU chief said that the first time the name of Michelle Muscat was when Ali Sadr left Malta.
Amy Borg
10:13 The board has mentioned how nowadays banks keep all data stored on computers.

Abdilla said that the first report received by the FIAU on Pilatus Bank was in July 2016 and November 2016.

The assistant police commissioner replied that no they did not take action because they cannot take actions every time the FIAU files a report on some sort of illegal practices.
Amy Borg
09:51 Lawyer Therese Comodini Cachia is asking Abdilla the exact date when the Police ordered for the closure of Pilatus Bank.

Abdilla says it was the 20th of April 2017.
Amy Borg
09:50 Abdilla is saying that the footage aired by Net News was not live.
Amy Borg
09:49 Abdilla is saying that Ali Sadr is the owner of the licenced bank and it was not like he was stealing something from the bank since it is his.
Amy Borg
09:48 The board of inquiry is continuing to press Abdilla why they did not act immediately and let him leave with the possibility of carrying documents on the secret Panama company Egrant.
Amy Borg
09:47 The board is asking why did the police not act immediately to stop Ali Sadr who was carrying a hand suitcase.
Amy Borg
09:45 Asked about the case of Pilatus Bank and when his owner Ali Sadr was filmed live leaving the bank late at night on one particular evening, Abdilla said that he received a call from the Police Commissioner at around 9 am.
Amy Borg
09:43 Abdilla said that he has and is still investigating hundreds of cases.